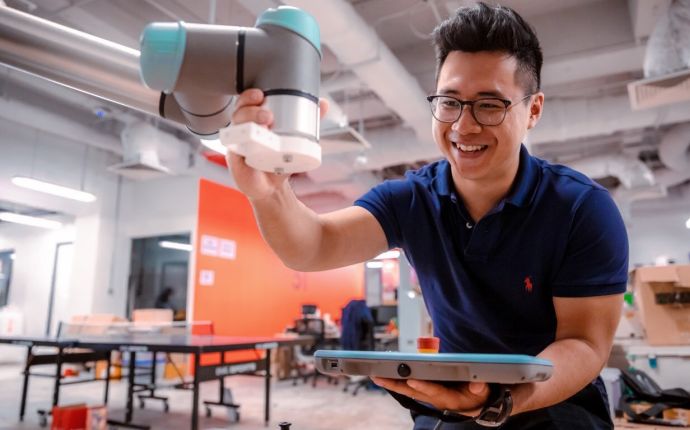 The funds will be used to support the launch of Augmentus’s platform and ramp up the hiring process across different roles including software development, business development, and partnerships.

Robot manufacturers today are using proprietary programming languages that demand extensive training and expertise. Since automation processes require a high level of customisation, approximately 75 per cent of the cost of an average industrial robot goes into software.

Founded in 2019, Augmentus wants to solve this by allowing companies to deploy complex industrial robots with high accuracy in a matter of minutes instead of weeks.

Its proprietary technology incorporates an easy-to-use graphical interface that eliminates the need for coding enabling up to 17 times faster programming and integration across various industrial applications.

Also Read: To cut down the cost of building robotic systems, Augmentus enables people to create one using an iPad

Some of the company’s clients include global robot manufacturers, like ABB, Universal Robots, TM Robots, Kuka, Nachi, and Mitsubishi Electric, to support over 60 per cent of the industrial robots in the market.

“With the growing adoption of industrial robots in industries such as manufacturing, automotive, and farming, Augmentus is on a mission to bring greater efficiency to the industry by lowering the time, cost, and skill barriers. Ultimately, we want to make robotics accessible to everyone to use in any application imaginable”, said Leong Yong Shin, co-founder of Augmentus.

“The quick embrace by leading robotics manufacturers is unique as early-stage companies usually take years to get this level of top executive attention. We are excited to partner with Shin and his team to accelerate a more automated, efficient, and robust manufacturing industry in a post-COVID world”, said Will Klippgen, Managing Partner at Cocoon Capital who also recently joined the Augmentus board of directors.