To bumble or not to bumble: Does Asia need its own dating apps? 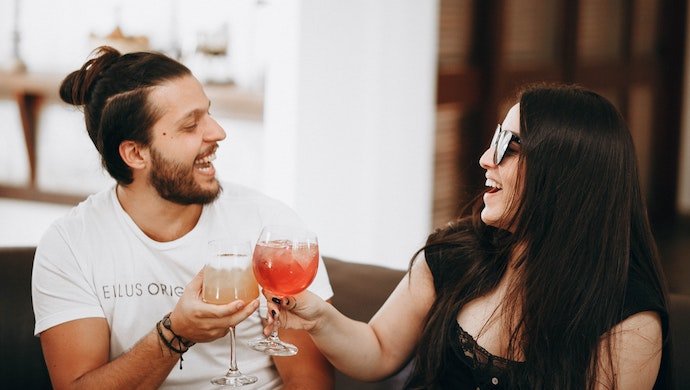 Bumble—the Austin, Texas-based startup founded by CEO and ex-Tinder entrepreneur Whitney Wolfe Herd, best known for having broken new ground as the female-first dating app—is getting ready for a February listing on Nasdaq under the stock ticker “BMBL.”

Herd was on the founding team at Tinder before falling out with the leadership in a big way—filing suit against her former employer for sexual harassment and discrimination—circumstances that she has since credited in part for inspiring her to build a dating app that put women at the helm of the online dating experience.

In addition to empowering women to take the lead in kicking off possible romantic connections, Bumble has been leaning in on scores of other matchstick issues ranging from banning profile pics that show men (or women) posing with firearms to her recent fight against fat-shaming on the Bumble app.

But how exactly Bumble will be received across the globe—heavy investment in global expansion is one of the purported uses of the funds raised in the forthcoming IPO—in cultures where gender roles and scores of other cultural nuances are quite different from those in the US, is still very much an open question.

Although Bumble’s PR machine has been a bunch of busy bees, buzzing in overdrive and making much out of its early traction in India’s online dating market, it did so as an early-mover in a country that had been slow to pick up on the global online dating phenomenon for young singles until COVID-19 effectively forced traditional avenues for courting on the back-burner.

How Bumble and Tinder, the 800-pound gorilla of the US dating space, will fare as they begin to go head-to-head overseas with online dating apps that originated abroad and have a better grasp on the manifold and complex cultural, linguistic, religious and gender-roles across Asia, the Middle East and Africa is giving some long-time observers of online social media a reason for pause.

Take for example, India—considered by many to be the crown jewel of the Asian dating app world. With a population exceeding 1.3 billion, of which nearly 20 per cent is in the prime age demographic for dating, it’s a prize both Bumble and Tinder have the hots for.

Tinder entered the Indian market in 2017 with its ‘Tinder Lite’ app which aims to soak up fewer minutes of mobile airtime in a country where many still pay for data on a per kilobyte basis. Yet four years later and after burning through considerable sums of cash, the company has still yet to amass a user base that compares with its success in North America.

But Tinder’s struggles in the developing world are not limited to India. In 2019, Tinder’s parent company, Match Group, acquired Harmonica, an Egypt-based dating platform, in the hopes that it would gain a presence across the Muslim world; however, neither Tinder nor any other Western-based peer has yet to crack the top 20 social apps in emerging Muslim-majority markets.

Another heavyweight on the global online relationship stage is Badoo, the brainchild of embattled Russian entrepreneur Andrey Andreev, which lays claim to being the world’s largest social connection app with over 400 million registered users.

Despite posting impressive numbers, Badoo had failed to define itself as a place for those serious about finding love, which partially explains why the Blackstone Group, the company’s majority shareholders, ended up merging it with Bumble.

One likely reason that major U.S. or European-based international dating platforms are struggling in Asia, Africa and the Middle East is the sheer level of diversity of ethnic groups, religions, cultural norms and languages in these regions.

The main drivers and market opportunities which propelled companies like Tinder and Bumble to success in North America—a region with a largely homogenous religious and linguistic group sharing a collective set of cultural norms—is unlikely to be easily replicated en masse across emerging markets, each with its own unique set of courting traditions.

In fact, many times, large countries—take India and Nigeria as prime examples—have multiple and distinct subcultures within them; understanding and mastering those subtleties takes boots-on-the-ground knowledge and a true commitment to localisation that goes beyond the glossy pages of an annual report.

For example, in many cultures, the role of the parents and other family members is a sine qua non component of the courting ritual. Religious practices in many Muslim countries have a long-standing practice of requiring young people of different genders to maintain social distance—long before the onset of COVID.

For these users, dating models predicated on the notion of connecting a prospective couple with an aim towards quickly fostering a real-life, in-person rendezvous will completely miss the mark. In many parts of Africa, finding someone who not only shares your language and religious beliefs but also has a common tribal affiliation is paramount.

Against this backdrop, dating apps that originate in specific emerging markets and hire local country managers are likely to have a better understanding of local practices and the ability to translate these norms into a better app experience.

“The fact that Bumble, Tinder and other U.S.-born businesses that call themselves ‘dating apps’ in societies where the mere concept of dating—at least by Western standards—is completely different, exposes their Achilles’ heel. This type of one-size-fits-all approach will not work in the rich mosaic of cultures you find spread across much of Africa and Asia.

Local market dynamics do not lend themselves to a global ‘winner takes all’ phenomenon in the online dating corner of the social media landscape,” observed Ethan Bearman, an analyst for Fox Business News who closely follows global social media trends.

“More likely what we are going to have is a series of dominant mainstream apps that do quite well in Western cultures—Europe, Australia, North America and perhaps Latin America—and then a few significant players that really understand the tremendous nuances involved in how the courting process works in the rest of the world that is, generally speaking, far more conservative in its approach to dating, sex and marriage.”

“Global online dating will almost certainly not be dominated worldwide by one or two U.S.-based companies,’’ emphasised Bearman. “I expect to see companies like Lamour give Tinder and Bumble a real run for their money in developing markets across the Middle East, Asia and large swathes of Africa.”

Lamour: The Tinder of the east

Lamour is the brainchild of Asia Innovation Group (AIG), a Hong Kong-based holding company that also owns Uplive, a popular live streaming social network that competes—or in many cases, replaces—Twitch, Facebook and YouTube across Asia and other parts of the world.

It’s a business model that lives and breathes localisation. “Few Asia-based companies have successfully introduced new services to so many countries around the world. AIG uniquely attracts the best international talent and empowers them to develop and deliver engaging social offerings at a time when the world is so lacking in human connection,” commented Jason Zhao, a partner at Kleiner Perkins Caufield & Byers China, which has been a major backer of AIG.

Although certainly not a household name among American GenZ-ers, Lamour, says it is a dating juggernaut across several key markets in Asia. Just five months after its India and Indonesia debut in July 2019, Lamour stood at No. 7 and No. 12, respectively, in Google Play’s non-gaming app ranking list.

Even more impressive, Lamour had entered the list of the top 10 apps by revenue in seven countries in the region by the end of the same year.

As was posited in a 2020 MIT-led deep dive into the global digital dating market, what separates success from ho-hum results isn’t necessarily better tech replacing old and inferior tech, but a better game plan. Although in many corners of the digital landscape, new, emerging technologies may allow fresh startups the opportunity to displace incumbent competitor; in the dating business, it has always been user experience that has been the key success driver for industry disruption.

The MIT report concluded that “successful market entry means, first and foremost, identifying a niche not optimally served by incumbents and understanding what barriers keep members of that segment from using existing products.”

In other words, once the barriers of adoption and use are addressed—which in the case of many developing markets across Asia and Africa is cultural—superior product design can displace better funded overseas competitors and even those with superior technology, although Lamour, argues that operating a lives streaming app across a mobile-first region is no small technological feat.

An American or British user familiar with Tinder or Bumble will certainly find Lamour to be a completely different social or dating experience. Inspired by China’s heated live streaming industry, Lamour prioritises video content rather than traditional profile pictures and text descriptions.

Like many other popular forms of social media in Asia and the Middle East, Lamour enhances the opportunities for social interaction on its platform by providing an array of games and the ability to give virtual gifts that keep users engaged and provide alternative, culturally appropriate ways for aspiring couples to interact—features that really emerged as sticky features during the spate of lockdowns stemming from the pandemic.

Another of Lamour’s biggest innovations was its realisation that oftentimes language and distance are not as big of a barrier to creating a possible match as they would be in the US market. “Given the preferred preference for video chatting and interaction in emerging markets today, Lamour has been uniquely designed to address regional cultural nuances, while at the same time becoming the first dating platform that has integrated video and translation capabilities,” observed Andy Tian, CEO and cofounder of AIG, the holding company that operates Lamour.

“For example, you might have the case of two young Muslims—one in Qatar and the other in Indonesia—who are highly compatible except for language and distance. The Lamour platform can connect these two people in a culturally appropriate way that would never be possible with a Bumble or Tinder. It’s actually quite an amazing phenomenon to see such a different way to connect people, compared to what we are used to seeing on dating apps in the US and Europe.”

At present, Lamour uses AI-based, real-time language translation that supports six languages—Mandarin, Cantonese, English, Japanese, Vietnamese and Arabic—with more on the way, in an effort to break down linguistic barriers between users, which expands their pool of potential connections.

The app also prioritises synchronous connection—matches between users who are online at the same time—reducing waiting times for those looking to be paired up. As a result, more than half of Lamour users receive responses from potential connections within five minutes of sending a message.

Yet beyond the technology, Lamour says its secret sauce is its commitment to the principle of “true localisation”—a concept that goes beyond supporting local languages and dialects and includes having in situ operational capability, as well as a deep understanding of local culture, society, market and users, a mix that ensures the best user experience possible.

Executives from Lamour are confident that it is this suite of soft skills, coupled with strong underlying technology, that will give Lamour a run at becoming the culturally appropriate ‘Tinder of the East.’

The post To bumble or not to bumble: Does Asia need its own dating apps? appeared first on e27.