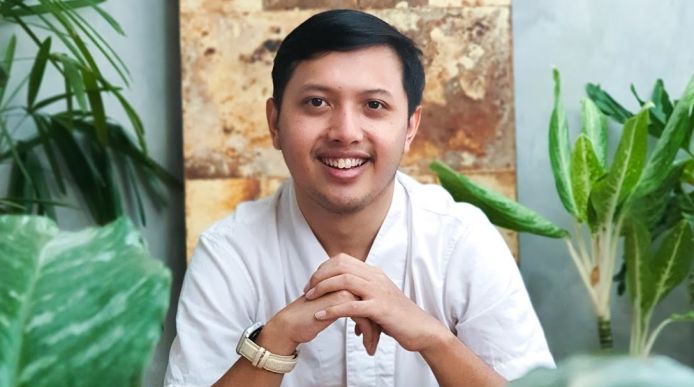 Adi Reza Nugroho, who was born and raised in a small village in Bandung, Indonesia, got a sense of the concept ‘sustainability’ while working on a traditional housing project.

This working experience made him realise that one doesn’t always need materials such as steel to make strong buildings; robust structures can also be made from agricultural waste.

He soon found himself starting a mushroom farm with co-founders Arekha Bentangan, Ronaldiaz Hartantyo and Annisa Wibi, with the intention of creating a sustainable material later in the future.

“We grew gourmet mushrooms on our farm. However, our intention was not to sell them forever but to start our own sustainability-focused startup. So, every time we generated profits in our business, we used the money to research on Mycotech Lab (MYCL),” he says.

Fungi, a substitute for leather

Launched in 2016, MYCL cultivates mycelia (a type of fungus) along with sawdust to make a substitute for animal-based leather.

The way it is created is that first the sawdust is cleaned with steam and mixed with mushroom spores. The mushroom then consumes the sawdust and produces mycelium which is then left to harvest for a few days.

The whole process consumes far less water than traditional animal-based leather mating process. The fashion industry is one of the beneficiaries of this sustainable material.

“The fashion industry has a large impact on climate because of the exploitation of animal leather. Chemicals that are used to tan the leather are also not biodegradable and can be extremely harmful to our waters,” Nugroho says.

The task in hand was not easy and it took Nugroho and team about five years of research and eight years of farming to eventually develop and launch MYCL.

Currently, MYCL’s materials are used by brands to manufacture wallets, watches and shoes.

According to Nugroho, MYCL has grown its client base with zero marketing spend but still receives inbound enquiries and emails every day from people who are interested in exploring mycelium. “This is because leather itself is highly volatile in terms of price and availability and therefore people need to find alternative sources of leather.”

In his view, while there are also several other substitutes such as faux leather and synthetic leather, they are not 100 per cent environmentally-friendly.

“When we send our samples to our clients, they are quite happy with the result because the texture of the material is similar to leather even though we do not use any PVC coating,” he adds.

MYCL is margin-positive, claimed Hugroho. What he means is that every product being sold by the company has a 40-30 per cent profit margin. He also shared that the company has more massive volume of orders to keep the team busy until 2027.

Because of heavy volume, the production unit is running to its full capacity and Nugroho has expressed plans to further expand its production facilities.

A B2B startup, MYCL sells its products to businesses in the domestic and global markets, which in turn develop these materials into actual products.

MYCL has recently collaborated with Brodo, one of the largest traders in Japan and a sneaker brand.

The startup is also collaborating on a project with ETH Zürich, Future Cities Laboratory Singapore and Singapore University of Technology and Design (SUTD) to explore the uses of mycelium composite for building material purpose.

Consumers, especially Gen Z and millennials, are becoming environmentally conscious, which has put immense pressure on brands to respond positively.

According to Pinterest, searches for “eco-friendly living” and “zero-waste products” have grown by 93 and 108 per cent in 2020. Additionally, conversations around sustainability on Twitter have also spiked by 285 per cent as of April 21, 2020, and this is unsurprising.

This has given a boost to the sustainability focussed market across the world, however, Nugroho still feels that not many startups in the Asia Pacific region are working towards climate action as compared to Europe.

Also Read: Life after COVID-19: How and why smart cities need to focus on sustainability

While creating products inspired by mushrooms is not really a new concept outside of Asia, MYCL happens to be one of the first companies to bring this technology to the mainstream market in Southeast Asia.

However, the fact that MYCL is located in Indonesia, one of the most affordable markets in the world, it opens doors for many global manufacturers to import its materials.

So far, MYCL has raised a seed funding of US$20,000 via Kickstarter and is also currently one of the startups participating in Singapore’s bridge fashion incubator.

In 2018, it also raised an undisclosed amount of investment from 500 startups and several other angel investors.

The post This startup by an Indonesian farmer produces ‘leather’ used in shoes and wallets without killing a single animal appeared first on e27.