The Impact of Gun Violence on Children and Adolescents 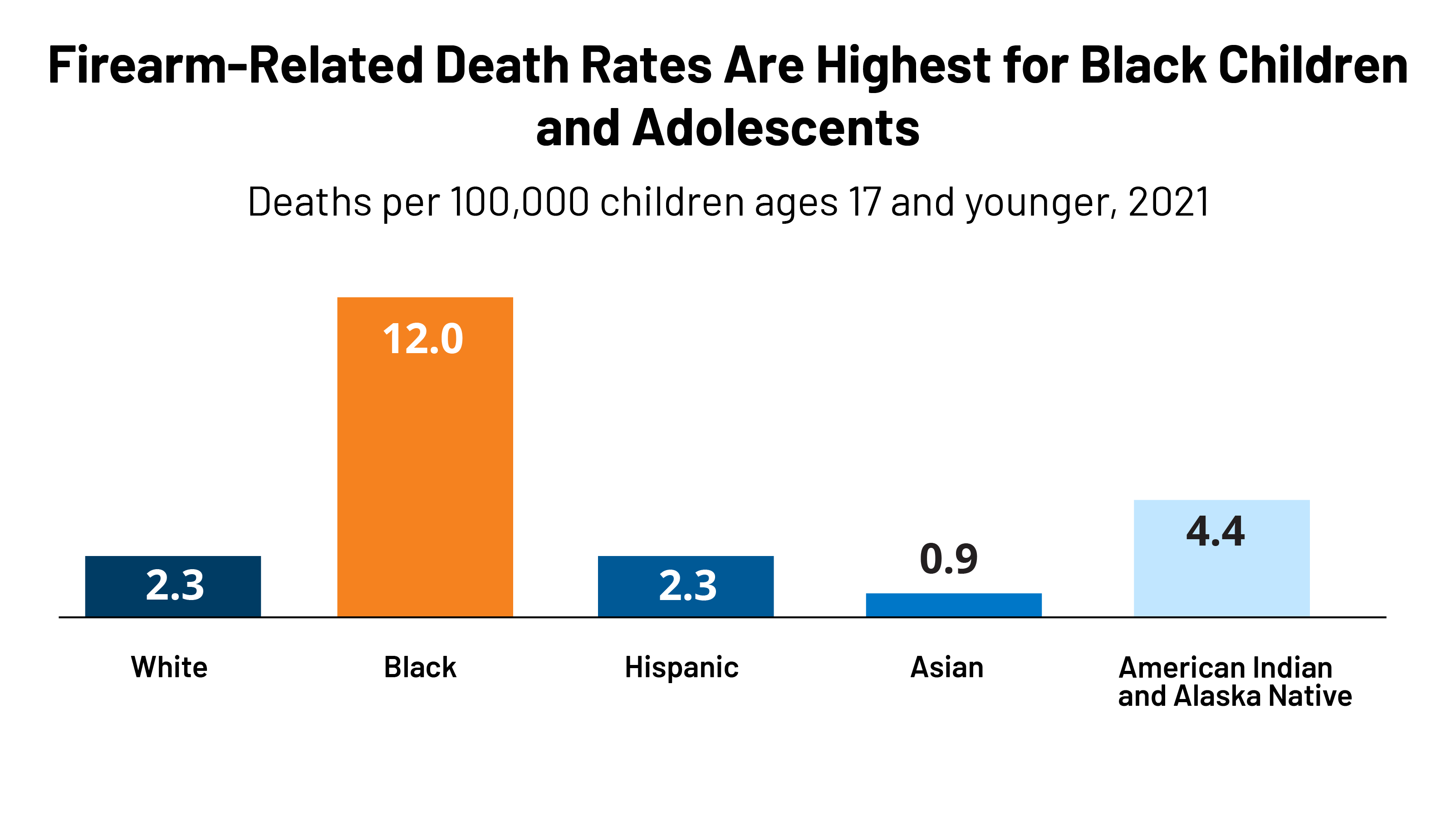 
Firearm injuries and deaths in the United States have increased in recent years and adversely affect many children and adolescents. In 2020, firearms became the leading cause of death among children ages 19 and below and in the first six months of 2022, there were over 300 mass shootings across the U.S., including the shooting at Robb Elementary in Uvalde, Texas.

In addition to physical harm, direct and indirect exposure to gun violence can negatively affect the mental health and well-being of youth. This brief explores trends in firearm-related injury and mortality among children (ages 17 and below) and how they vary by race and sex. We analyze data from the Center for Disease Control and Prevention (CDC) Wonder injury and mortality database and define firearm-related deaths as gun assault deaths, suicide deaths by firearm, deaths due to accidental firearm discharge, legal intervention leading to firearm death, and firearm deaths from an undetermined cause. This brief also examines the negative mental health consequences stemming from exposure to gun violence and describes recent policy responses.

During the pandemic, firearm-related deaths increased among children, with seven children per day dying by firearm in 2021. From 2011 to 2021, nearly 18,500 children ages 17 and younger died by firearm. During this period, firearm death rates gradually rose until 2017, then slowed through 2019, before sharply rising in the first two years of the pandemic (Figure 1). From 2019 to 2021, the firearm death rate among children increased by 50% (from 2.4 to 3.6 per 100,000). This translates to seven children per day dying by firearm in 2021. Throughout the past decade, assaults have accounted for at least half of all youth firearm deaths while suicides by firearm have accounted for at least three in ten of these deaths. The spike in youth firearm deaths during the pandemic have primarily been driven by gun assaults. Firearm-related injuries among children have also increased in recent years – from 9.9 per 100,000 in 2010 to 15.5 per 100,000 in 2020 (the latest firearm injury data available).

Firearm death rates sharply increased among Black and Hispanic youth during the pandemic. In 2021, the rate of firearm-related deaths among Black youth was 12.0 per 100,000 – substantially higher than any other racial and ethnic group and six times higher than White youth (Figure 3). Although Black children made up 14% of the youth U.S. population in 2021, they accounted for 46% of youth firearm deaths. Additionally, from 2018 to 2021, the rate of firearm-related deaths doubled among Black youth and increased by 50% among Hispanic youth. While firearm death rates for American Indian and Alaska Native (AIAN) youth fluctuated over the same period, they remained higher than the rates of their White peers. White youth experienced relatively stable and lower firearm mortality rates from 2018 to 2021 (from 2.0 to 2.3 per 100,000), while Asian youth had the lowest firearm mortality rates across the period (Figure 3).

Male youth are over four times more likely than their female peers to die by firearm. From 2018 to 2021, the rate of deaths due to firearms increased by 53% among male youth but remained lower and stable among female youth (Figure 5). Firearm-related injury rates were also substantially higher for male youth than females (25.9 vs. 4.5 per 100,000) in 2020 (the latest firearm injury data available).

Gun violence can adversely affect the mental health and well-being of children. Children are exposed to firearms in a number of ways, including domestic violence and firearms stored at home, and neighborhood and school violence. This exposure may lead to post-traumatic stress disorder and anxiety, in addition to other mental health concerns. Specifically, survivors of firearm-related injuries, including youth survivors, may be at increased risk of mental health conditions and substance use disorders. Gun violence may also lead to challenges with school performance, including increased absenteeism and difficulty concentrating. Additionally, research has found that access to firearms, particularly in the home, is a risk factor for suicide deaths among children and adolescents. Nearly half of suicide attempts occur within 10 minutes of the current suicide thought, further underscoring access to firearms as a risk factor for suicide.

Although mass shootings, including school shootings, account for a small portion of firearm-related deaths, they can negatively impact the mental health of children and communities at large. For example, research has found that youth antidepressant use and suicide risk increased in communities with exposures to school shootings. Additionally, a survey prior to the pandemic found that the majority of teenagers and their parents felt at least somewhat worried that a school shooting may occur at their school. In response to school shootings, nearly all schools practice active shooter drills. Some research suggests these drills have a negative psychological impact on participants. Although research is limited on how mass shootings affect individuals not directly exposed to them, current literature suggests that information and knowledge of mass shootings may be linked to increased levels of fear and anxiety.

Recent policies address gun reform and expand mental health services for children and adolescents. In response to increasing gun violence, the Bipartisan Safer Communities Act was recently passed. This legislation introduces several gun reform provisions, such as strengthening background checks for young adults and reducing gun access for individuals with a history of domestic violence. The legislation also focuses on youth mental health, including expanding school-based mental health services and providing trauma care to students in need. Prior legislation, such as the American Rescue Plan Act and state-level policies, have also provided pathways to expand mental health services for students in schools. The Biden-Harris administration has put forth several additional initiatives aimed at addressing youth mental health, including expanding the behavioral health workforce and suicide prevention efforts. The Department of Health and Human Services recently announced an initiative aimed at promoting Black youth mental health – this comes at a time when suicide rates among Black youth have sharply increased. Additionally, the federally mandated crisis number, 988, was rolled out this summer and can connect individuals experiencing suicidal thoughts or other behavioral health emergencies to crisis counselors. Further, after an extended period of funding freezes and limited research, recent federal budgets have allocated funding for gun violence research.

This work was supported in part by Well Being Trust. KFF maintains full editorial control over all of its policy analysis, polling, and journalism activities.

Deaths From COVID-19 Spiked Over The Summer, Especially Among People 65 and Older, Before Dipping Again in September