coronavirus India; How India’s virus outbreak compares to the rest of the world


The world is watching in horror as India is stricken by a coronavirus crisis, but the nation does not actually have the most daily new cases in comparison to its massive population, according to official figures.

The Mediterranean island of Cyprus currently has the largest number of cases per population, with 929 people per one million testing positive daily in the last week.

By comparison, India is the world’s second largest nation with almost 1.4 billion people and, according to Our World in Data, in the last week there have been about 209 new daily cases per one million people.

The South American nation of Uruguay (854 new daily cases per million) and the Middle Eastern country of Bahrain (620) are also at the top of the table in terms of case rates.

However, experts warn India’s crisis could worsen with fears of half a million cases per day in coming weeks.

There are also fears that the true numbers are far higher, with many people with the virus likely not being tested and deaths not being properly recorded.

The nation also has notoriously poor health care, and hospitals are running out of oxygen and turning desperate patients away.

A total of 143 million vaccine doses have been given out, but less than two percent of the population is fully vaccinated, according to Our World in Data.

In the capital Delhi, one-in-three people going for a test were being told they had the virus.

India has become the fourth nation to pass the grim figure of 200,000 coronavirus deaths, after the US, Brazil and Mexico.

Looking at the last seven days, the nation which has seen the most deaths in comparison with its population, is Hungary.

India is also the second nation after the US to hit more than 300,000 daily cases.

However, the US has a significantly lower population of 328 million.

Overall, the nation with the most total deaths in numbers alone remains the US, with more than 572,000.

The ban will last for at least two weeks, with Prime Minister Scott Morrison saying the number of Aussies returning from India with the virus is putting pressure on the mandatory hotel quarantine.

Only Australian citizens and permanent residents are allowed in. 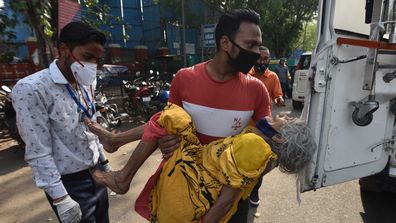