Weather forecasters are warning of a high-impact weather event on the way for south eastern Australia next week.

Early predictions show the possibility of a cut-off low – pools of cold air that become ‘cut off’ from the belt of westerly winds that flow between Australia and Antarctica.

A cut-off low can cause a dynamic mix of dangerous weather including heavy rain, severe thunderstorms, damaging winds, snow, hail, and dangerous surf.

Several forecast models are showing early signs that a cut-off low could move across southeastern Australia between Monday and Wednesday next week.

This upper-level system has the potential to impact parts of South Australia, Tasmania, Victoria, NSW and the ACT.

Onshore winds are bringing the odd light shower to western Tasmania and coastal parts of Queensland and New South Wales.

Areas including Bargo, Bringelly, Camden, Campbelltown, Liverpool and Oakdale are still experiencing increased levels of air pollution and people at risk of asthma or other medical conditions are warned to avoid exposure.

A strong wind warning is in place for Queensland, Tasmania and Western Australia today. 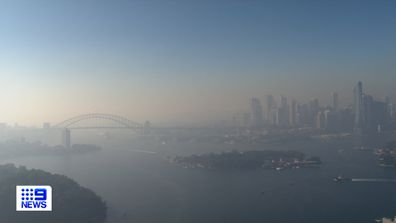