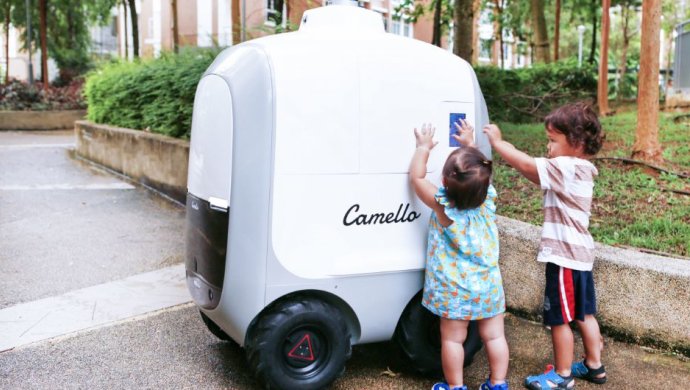 Named Camello, the robots are currently undergoing a one-year trial with their services offered to 700 households.

According to the report, users can book delivery slots for groceries including milk and eggs, and they will be notified through an app when the robot is near a pick-up point, such as the lobby of an apartment building.

Camello is installed with 3D sensors, a camera and two loading compartments which individually can carry up to 20kg of goods.

These robots are able to complete up to five deliveries daily on weekdays and remain on call for half a day on Saturdays.

The robots are currently accompanied by Otsaw’s staff to ensure no hiccups occur during deliveries.

Also Read: This made-in-Singapore robotic coffee barista will receive you at Japan’s train stations ahead of Olympics

Otsaw’s founder and CEO Ling Ting Ming shared with Reuters the robots utilise ultraviolet light to disinfect themselves after each trip and Camello represents a welcomed solution during the pandemic due to the preference for contactless and humanless deliveries.

The launch of autonomous delivery robots comes a month after Singapore’s Infocomm Media Development Authority (IMDA) announced it will be leading a year-long trial of autonomous robots in providing on-demand courier deliveries.

“With the growth of e-commerce, consumers have grown accustomed to expecting food, products and groceries to be delivered to their home in increasingly shorter periods of time. Autonomous delivery robots can play an important role in augmenting existing delivery infrastructure to enhance the consumer experience and drive productivity gains,” said Kiren Kumar, Deputy Chief Executive, IMDA.