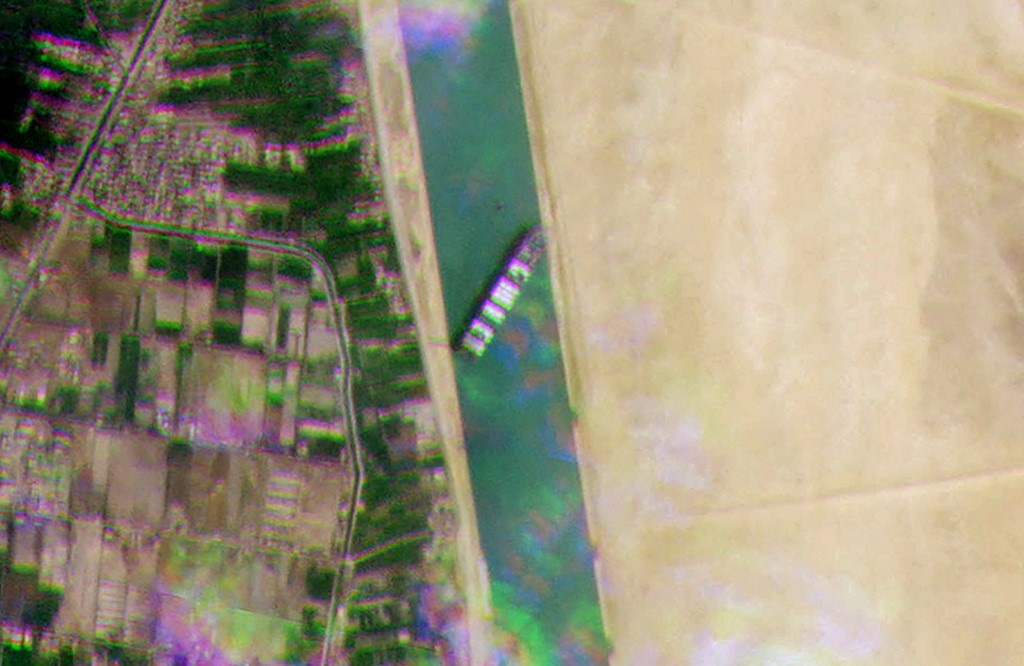 
Tug boats worked Wednesday to free a giant container ship stuck in the Suez Canal after it veered off course in a sandstorm, creating huge tailbacks on one of the world’s busiest trade routes.

Egypt’s Suez Canal Authority said it was doing all it could to refloat the Taiwan-run but Panama-flagged MV Ever Given, a 400-metre (1,300-foot) long and 59-metre wide vessel, which was lodged at an angle across the waterway.

Historic sections of the canal have been reopened in a bid to ease the bottleneck of backed up marine traffic, with dozens of ships waiting on both the Mediterranean and Red Sea sides.

The SCA said the ship was caught up in a gale-force sandstorm, a common occurence in Egypt’s Sinai desert at this time of year, which blotted out light and limited the captain’s ability to see.

It was “mainly due to the lack of visibility due to the weather conditions when winds reached 40 knots, which affected the control” of the ship, the SCA said in a statement.

Ship operator Evergreen Marine Corp told AFP that the Rotterdam-bound vessel “ran aground after a suspected gust of wind hit it”.

Storms with dense dust clouds carrying fine sand have swept across much of the Middle East since Tuesday.

Shipping monitors MarineTraffic recorded that the vessel had been in the same position since at least Tuesday afternoon.

SCA chairman Admiral Osama Rabie said in a statement Wednesday morning that “rescue and tug units are continuing their efforts” to free the MV Ever Given, involving at least eight tugs.

Bloomberg reported it had caused a build-up of more than 100 ships seeking to transit the canal.

“There was a grounding incident,” Alok Roy, fleet director of BSM Hong Kong, the Ever Given ship manager, told the news agency.

Photographs released by the SCA also showed excavators onshore digging soil from the canal’s bank, with the earth-moving equipment dwarfed by the giant hull towering above.

The canal, which links the Mediterranean to the Red Sea, was opened to navigation in 1869, and was expanded in 2015 to accommodate larger ships.

MarineTraffic showed a map with large clusters of vessels circling at both ends of the canal — in the Mediterranean off Port Said, and stretching far southwards into the Red Sea.

Instagram user Julianne Cona posted a photo of the grounded ship from the Maersk Denver, which was forced to wait behind the Ever Given.

“Ship in front of us ran aground while going through the canal and is now stuck sideways,” she wrote. “Looks like we might be here for a little bit.”

The Suez Canal is one of the world’s most important trade routes, providing passage for 10 percent of all international maritime trade.

The journey between ports in the Gulf and London, for example, is roughly halved by going through the Suez — compared to the alternate route via the southern tip of Africa.

Even a short closure of the route has a big impact on “just in time” logistic chains, said Camille Egloff, transport and logistic expert at Boston Consulting Group.

While Egloff said the ship was in a “hyper-controlled environment” and suggesting it would be “a matter of hours” before traffic was moving freely again, the costs would add up.

“It costs a lot of money, because it blocks the traffic behind,” she said.

“There will be a domino effect in all the European ports in the coming days.”

Nearly 19,000 ships passed through the canal last year carrying more than one billion tonnes of cargo, according to the Suez Canal Authority (SCA).

It has been a boon for Egypt’s struggling economy in recent years, with the country earning $5.61 billion in revenues from the canal in 2020.

President Abdel Fattah al-Sisi unveiled plans in 2015 for an expansion designed to reduce waiting times and double the number of ships using the canal daily by 2023.

Container ships account for more than half of the canal’s total traffic, with some of them being among the largest in the world.

Most of the cargo travelling from the Gulf to Western Europe is oil.

In the opposite direction, it is mostly manufactured goods and grain from Europe and North America headed to the Middle East and Asia.