If you come across a baby turtle when walking along the beach, don’t put it back in the water.

Instead of travelling out to richer feeding grounds around New Zealand and New Caledonia, the hatchlings are getting caught in big swells and ending up on Sydney and South Coast beaches.

Australian Seabird Rescue is taking care of baby loggerheads before they can be released back into the ocean.

“Baby turtles washing up on southern beaches can be problematic because they haven’t been able to go where they need to go for their natural environment,” general manager Olly Pitt told nine.com.au.

“Another concern is hatchlings that are washing up and don’t make it, we are finding plastic in their tiny little guts.”

Loggerhead turtle hatchlings tend to be about five or six centimetres, but fully grown can reach up to 110 centimetres.

It takes about 30 years for loggerhead turtles to reach maturity and start breeding. They can live as long as 67 years.

But at their youngest, loggerheads turtles are very vulnerable.

“The only thing we ask is please do not put them back in the water, it’s likely they will not survive,” she said.

Hatchlings rescued from the South Coast will likely be taken further north to be released in more suitable waters.

Loggerhead turtles are endangered, but have a broad geographical range. 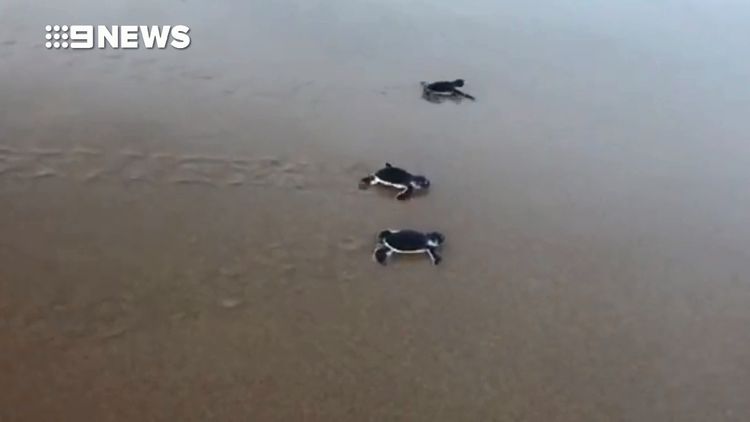 The turtles are found off the coast of nearly every country on Earth, save for the west and south of South America.