War of warungs: Decoding the race to win the warung game in Indonesia 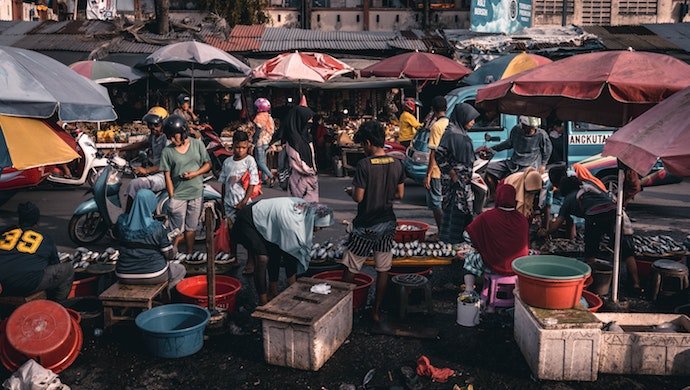 Indonesia is home to a US$380 billion retail market which accounted for about 35 per cent of total GDP in 2019.

Close to 80 per cent of the US$380 billion retail industry is dominated by the unorganised sector characterised by local “mom and pop” stores which come in various shapes and sizes (for simplicity, we will use a catch-all phrase“warung”).

There are a number of tech start-ups including unicorns (e.g. GoJek), soonicorns (e.g. Warung Pintar) or upstarts (e.g. Ula) which are vying for a piece of this US$300 billion+ industry.

Warung Pintar recently announced its acquisition of Bizzy Digital. Founded in late 2017 as an incubation project of prolific venture fund East Ventures and was probably one of the first focused players in the warung digitalisation space (yes, the sector is that new).

A micro-retail start-up with a big mission to digitally-enable millions of warungs in Indonesia, its platform helps retailers access supplies, offer digital services to its customers and expand revenue opportunities.

The target, Bizzy Digital, is a spin-off from one of the largest traditional distributors in Indonesia, Bizzy Distribution.

With its distribution roots, Bizzy Digital took a different approach to the market by building its platform with a supplier-first (brands and distributors) mindset. Bizzy’s supply side platform equips brands and distributors with tech tools and operational software to provide insight into this notoriously opaque market.

As a stand-alone business, Warung Pintar was already a force to be reckoned with but with Bizzy Digital’s acquisition, it is probably the force to be reckoned with. Warung Pintar’s expertise on-demand generation and Bizzy Digital’s supply consolidation capability creates a fully integrated player up-and-down the supply chain. The combined entity has 230,000 retailers and 600 brands in 65 cities across Indonesia.

Warung Pintar is well-funded with a particularly strong shareholder base including East Ventures, Sinarmas Digital Ventures, Vertex Ventures, Line Venture and the list goes on.

East Ventures is known for its early bets in Indonesian unicorns such as Tokopedia (B2C e-commerce) and Traveloka (Travel Tech) – could Warung Pintar be the B2B e-commerce equivalent? We can safely say its backers are in for the long-term, have deep pockets, and experience in scaling from zero to hundred.

GudangAda, the B2B e-commerce marketplace may only be two years old but its founder, Stevensang is an industry veteran with over 25 years of experience working at a large local distributor.

GudangAda, primarily focused on helping wholesalers connect directly with warungs via its B2B marketplace platform, has grown exponentially since inception and claims to have close to 100 per cent wholesaler coverage and more than 200,000 retailers on its platform.

GudangAda however, has taken a different approach with a pure marketplace model and wholesaler-focus. We understand they want to expand their supply coverage beyond wholesalers to distributors and principals (brands) but have yet to do so at scale. It’s early days and no one can accurately predict which model will prevail or if they ultimately co-exist.

If funding is a measure of early success (we don’t claim it is), GudangAda is right up there with Warung Pintar, having raised two successive rounds within six months, the last one being US$27.5 million Series A led by Sequoia Capital India and Alpha JWC Ventures.

And it appears the company’s founder has no plans of slowing down on fundraising, announcing its plans to raise a bumper US$75 million Series B round in 2021.

Also entering the space is Indonesia’s most valuable tech company GoJek, which launched its own B2B e-commerce platform GoToko in September 2020. Shortly after its launch, GoToko announced its strategic partnership with Unilever, one of the most successful international FMCG companies in Indonesia.

GoToko has a similar customer value proposition to other players but may bring a competitive edge with its established last-mile delivery infrastructure, synergies with its other SME offerings (e.g., Moka, GoBiz), experience in scaling digital platforms, and large cash reserves.

Arguably Grab had most if not all of the above advantages but it has not yet been able to convert that into noticeable success with GrabKios, a GoToko-like B2B eCommerce platform.

As GoJek prepares to turn a profit, merge with Tokopedia, and eventually IPO – will it have to step back from this market and double down on its core services? Remains to be seen.

If everyone is here, could the Mitras be far behind? The B2B platforms of the homegrown B2C e-commerce unicorns like Bukalapak and Tokopedia are very much in the mix but have faced mixed fortunes.

eCommerce giants Tokopedia and Bukalapak have led the way in the B2C space and seen hyper-growth since inception. However, they have faced mixed fortunes in the B2B space with Mitra Bukalapak seeing more success than Mitra Tokopedia.

Mitra Bukalapak has nationwide coverage and claims to have 5.4 million warungs on its platform while Tokopedia is believed to have limited presence and retailer coverage.  Their business models are understood to be similar; a digital wholesaler taking inventory risk by buying the products from distributors or principals and selling to warungs on a (small) margin.

The common value proposition for Tokopedia and Bukalapak (and their differentiation over others) is the synergies they bring to the warungs with their online retail ecosystem and logistics infrastructure.

Tokopedia will be focused on streamlining its operations and focusing on core businesses as it heads towards the much talked about merger and subsequent public listing, whereas Bukalapak has no such imminent restrictions and can potentially double down on the B2B space(offline merchants already account for about 30 per cent of its revenues).

However, it must work closely on pricing and distribution with the FMCG players it relies upon for supply or risk their wrath, similar to when tobacco-giant Sampoerna backed out of the Bukalapak platform in 2019.

Ula, Wahyoo, and Aplikasi Super are only a few of the numerous upstarts which are making a play for the large opportunity.

The Indonesian B2B e-commerce landscape is of such scale and involves many types of stakeholders meaning there are still pockets of opportunity left in the market despite the presence of such big players.

The upstart challengers are many and each with a unique take on the market. The most notable in our eyes are either planning a multi-sector play (Ula), targeting different types of warung (Wahyoo), or leveraging on the social commerce theme (Super).

This massive opportunity does not come without its hurdles. Some of the key challenges include acquiring warungs rapidly, but more importantly retaining them in the long-term by consolidating best priced supply and making online their de-facto model; working with, not against, the established suppliers by bringing them along on the digitisation journey and sharing control over pricing and promotions; and strictly rejecting any volume distortions with “round-tripping” of SKUs.

The eventual winners will solve these hurdles deftly and swiftly.

B2B eCommerce in Indonesia is going through an accelerated adoption phase and we foresee a lot of transaction activity happening for the next years to come.  Here are some of our predictions:

Image credit: The Ian on Unsplash

The post War of warungs: Decoding the race to win the warung game in Indonesia appeared first on e27.