Parts of South East Queensland are on high alert as heavy rain lashes the region.
Authorities said there could be in excess of 150mm of rain from the Sunshine Coast to the northern NSW border over the coming hours.

The SES has received more than 300 calls for help overnight, mainly for flood inundation to homes.

“A lot of those requests have been about flood inundation to homes as well as trees down and we have also seen a couple of flood boat rescues as well,” QFES State Coordinator Brian Cox told Today.

“It has been a very busy period…we are asking people not to be complacent.

“This weather event will hang around for the next three days. The ground is already saturated so the risk of flooding is quite high.”

There was flash flooding in Brisbane, with it and Logan receiving over 100mm of rain over a 24 hour period.

The heavy downpour caused flash flooding and even cracks in roads in Logan. 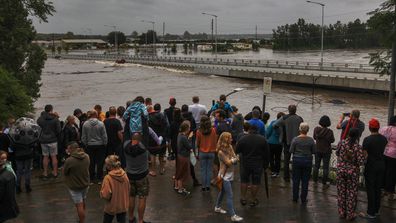 The Bureau of Meteorology said most of the heavy rain will be seen further south in NSW.