An evacuation warning has been issued in northern NSW, as forecasters warn of “dangerous and life-threatening” flash flooding sweeping down the coast towards Sydney.

A total of 1600 calls have been made to the SES since yesterday, when parts of the NSW Mid North Coast saw almost 300mm of rain – more than three months’ worth in just a few hours.

There were also more than 20 flood rescues across the state, as constant rainfall swamped roads, saw a school evacuated and sparked warnings to cancel travel today and over the weekend.

Residents living near the Myall River in Bulahdelah, north of Newcastle, have been told they might have to evacuate due to rising water.

Weather warnings now extend down to the Hunter Region, with Sydney and Illawarra due to see the worst later today and tomorrow.

Many places across the state have topped 100mm of rain in 24 hours, with Sydney commuters battling a wet journey to work this morning.

NSW Premier Gladys Berejiklian warned residents to stay at home over the weekend.

“Please know that this weekend is going to be quite severe in terms of weather conditions and we don’t want to see any lives lost as a result of that,” she said.

“Please follow the warnings, stay at home where you can.”

In a severe weather warning reissued this morning, the Bureau of Meteorology said: “Intense rainfall which may lead to dangerous and life-threatening flash flooding may develop over the Mid North Coast and parts of the Hunter as continued rainfall impacts the region.

Weather forecaster Gavin Morris described the downpour as probably “once in a generational”.

He said the main area of concern for today would be south of the Clarence Valley across the Coffs Coast to Nambucca and Kempsey but the bad weather would keep heading south.

“We’re going to see this system extend further south as we move through the weekend and that will continue to threaten the central coast, Sydney basin and then further south to Illawarra and Shoalhaven,” he told 9News.

Rain gauges right along the coast recorded staggering figures yesterday, with a month’s worth of rain dumped in as little as three hours.

Seven Oaks, between Port Macquarie and Yamba, copped the worst of it, with 289mm from 9am yesterday to 5am today.

Almost half of that fell in just three hours, exceeding the March average.

Nearby Kempsey had 179mm of rainfall since, Alvadilla copped 214mm and Blacksmiths in Lake Macquarie received 187mm.

What to expect this weekend

Weather bureau experts say conditions could get worse there, ahead of the wild weather moving south to the Hunter, Sydney and Illawarra today and into the weekend.

Senior climatologist Agata Imielska warned with the ground already wet it “won’t take much rainfall” to cause flooding, and “dangerously wet conditions” were possible.

“We are expecting some widespread heavier falls, potentially up to twice the amounts that may be recorded in nearby regions,” she said.

“It’s really about the amount of time this rainfall will fall.

Chief Superintendent Greg Swindells from the SES said the service was well prepared on the Mid North Coast, with plans underway to scramble volunteers in Sydney.

“What we urge the community to do is to take notice, listen, as these are updated from watchings to warnings,” he said.

He said the service’s 4500 volunteers in Sydney were being told to be prepared to help.

He reminded people never to drive through floods and said people should consider putting off travel this weekend. 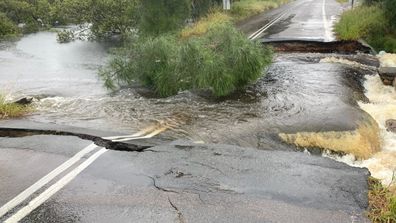 “We just need people to be safe and look after themselves,” Chief Superintendent Swindells said.