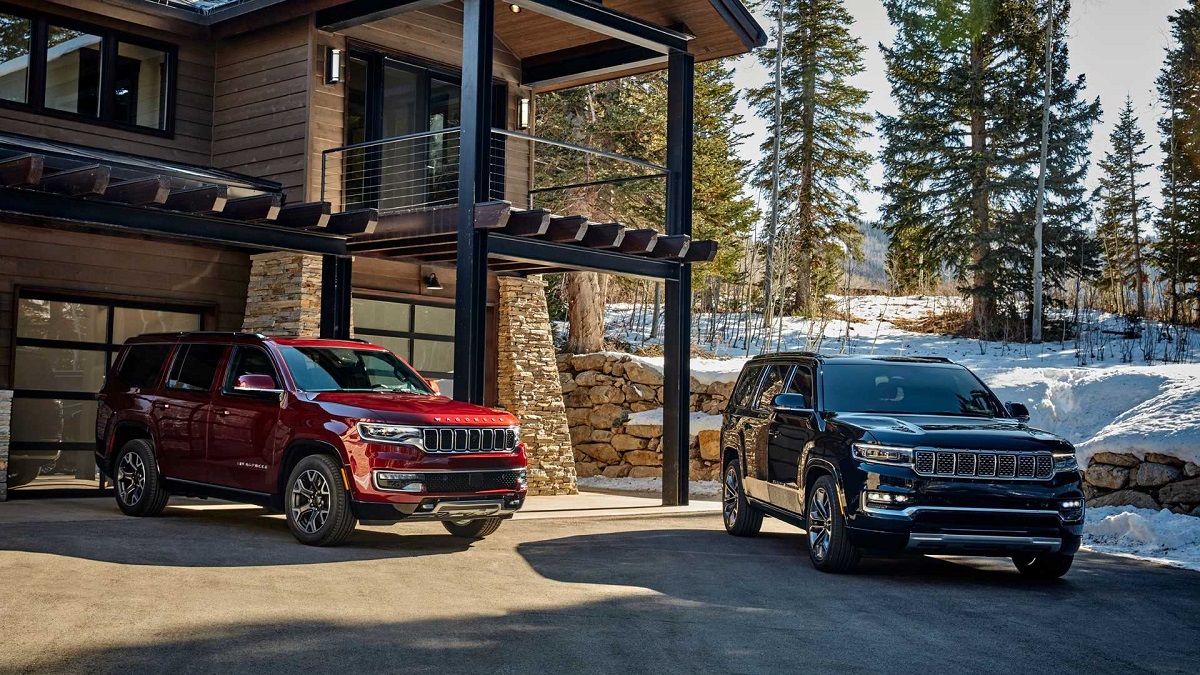 
Billed as a concept much to the surprise of many observers and indeed the media, Jeep has finally detailed the production version of the long awaited Wagoneer and luxurious Grand Wagoneer.

True to the form of the pre-production model shown last year, the Ram 1500 underpinned models have been toned down a little in the styling department and on the inside, with the main differences apart from price, being the level of specification and engines. Measuring 5,453mm in overall length with the wheelbase coming in at 3,124mm, the width at 2,388mm and the height at 1,920mm, the Wagoneer sits above the unibody Grand Cherokee L in Jeep’s lineup, with the Grand Wagoneer occupying the position of flagship Jeep aimed at domestic rivals such as the Lincoln Navigator and Cadillac Escalade.

Devoid of any Jeep or Trail Rated badges with block letter Wagoneer or Grand Wagoneer logos being displayed on the bonnet, at the base of the doors and on the tailgate, both seat up to eight with Jeep claiming a boot space of 776 litres with all three rows in use. Standard on the Grand Wagoneer though, but optional on the Wagoneer, is the Quadra-Lift air suspension that raises the ground clearance from an “everyday” 211mm to 257mm.

Towing capacity, regardless of the drive, is rated at 4,535kg for a braked trailer with Jeep claiming a departure angle of 24 degrees, breakover of 22 degrees and approach of 25 degrees. The claimed wading depth is 610mm. Reserved for the Grand Wagoneer is adjustable ambient lighting, a 10.25 inch display housed on the passenger side, a wide selection of materials ranging from wood to leather and aluminium, the 12 inch Uconnect infotainment system and dual 10.1 inch second-row screens.

Optional on the Series II and II, trim levels that also apply to the Wagoneer, but standard on the Series III is a 23 speaker, 1,950W McIntosh 3D sound system. No details about safety or driver assistance system were revealed.

As mentioned, the biggest difference resides underneath the bonnet where both are motivated by a single petrol engine not offered on the other. In the case of the Wagoneer, momentum comes from the Ram 1500’s electrified 5.7 Hemi V8 that produces 292kW/548Nm of torque. For the Grand Wagoneer, Jeep has opted for the conventional non-hybrid 6.4 Hemi V8 rated at 351kW/617Nm. Both are paired to a rotary dial operated eight-speed automatic gearbox.

Heading for dealership floors across the US later this year, pricing for the Wagoneer kicks-off at $57,995 (R865,000) for the rear-wheel drive Series I and at $86 995 (R1,3 million) for the four-wheel drive Grand Wagoneer Series I. However, with Jeep having ruled right-hand drive production out, neither are forecast to arrive on local shores any time soon.