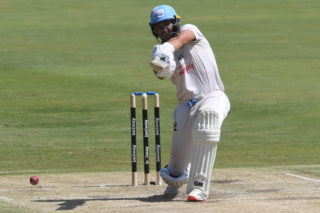 
Aiden Markram was in imperious form as he notched a maiden double-century and batted the Titans through to a draw in their 4-Day Domestic Series match in Centurion on Wednesday.

Markram finished with 204 not out in more than 500 minutes at the crease and faced 342 balls, stroking 27 fours and a six, as he led the Titans to 386 for three in their second innings.

Facing a big first-innings deficit of 151, it was an incredible effort by the Proteas opener, who has now scored a phenomenal 1133 runs in just 12 innings at SuperSport Park. With six centuries and two fifties, his average on his home ground is a mountainous 103.00.

Wednesday’s innings, the highest ever for the Titans against the Knights, was studded with majestic pulls and drives off both the front and back foot. He launched testing fast bowler Migael Pretorius back over extra cover for four to reach his 150. The previous highest score for the Titans versus the Knights was 192 by Jacques Rudolph in Bloemfontein in 2009/10.

Markram and his Test opening partner Dean Elgar set up the rearguard action by the Titans as they added 213 for the first wicket, their best partnership together and a franchise record.

With the home side beginning the final day on 162 without loss, there was still a chance of the Knights pushing for victory, but Markram and Elgar made a skilful, positive start to the day.

Elgar batted through the first hour and made it to a typically defiant, but often entertaining, 90.

The left-hander was then caught behind off leg-spinner Shaun von Berg, who then dismissed Neil Brand in his next over for a duck, to give the Knights some hope.

But Sibonelo Makhanya played with tremendous freedom in an exciting 68 off 108 balls, and with the Titans lead already in excess of 200 at tea, the captains shook hands on the draw.