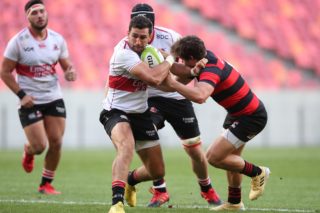 
The EP Elephants were heavily punished for poor discipline and ended their Preparation Series clash against the Lions in Port Elizabeth on Wednesday with 13-men.

In a game marred by the brandishing of five cards and numerous injuries, the home side actually showed more mettle than the 54-24 score-line may have suggested.

It was an ill-disciplined, scrappy affair and not one to put in the memory bank, with two penalty tries awarded to the Lions, adding to the two red cards dished out to the EP Elephants.

The required interventions by the referee proved to be disruptive and affected the flow of the game, with the visitors eventually scoring eight tries to four, with a flurry of three late tries in the final three minutes.

A late intercept try by fullback and EP skipper Courtney Winnaar underlined the Lions’ at-times poor organisation on defence, but they weren’t made to pay by a side that ended the match with 13 men.

Despite the advantage, the Lions looked rattled on defence and EP were able to expose them in the wide channels, especially in the first half. The Lions led 21-12 at the break.

The game started on a low for the Elephants after lock Arnold Kleyn was red-carded by referee AJ Jacobs after just two minutes for a dangerous tackle on Lions centre Manny Rass.

Just minutes later Jacobs again stuck his hand in his pocket after handing a yellow card to Lions scrumhalf Dillon Smit for stomping on the arm of an EP player and cancelled a try by Lions centre James Mollentze.

Sadly Mollentze cried off with a knee injury shortly afterwards, to be replaced by Luke Rossouw, who scored one of the Lions three tries in the first half.

By the 10th minute EP were down to 13 men after a yellow card to flank CJ Velleman which resulted in a penalty try for the Lions at a maul and the first points of the game.

With the Lions realising their best attacking weapon was the rolling maul, a big battle emerged between Velleman and Lions opensider Mark Snyman, who also got a yellow card later, with  Velleman getting his marching orders for a second yellow card, resulting in an automatic red