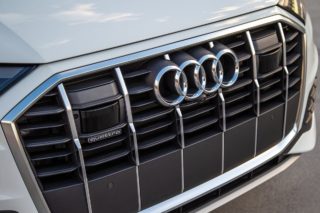 
Audi’s long rumoured Q9, of which reports date back nearly three years, is on course to become a reality, following reports from last year.

Based on pre-production spy images posted by Australia’s carexpert.com.au of the prototype undergoing winter testing, the step up from the Q7 and Q8 will not feature a coupe-like appearance as claimed by Germany’s Auto Bild in 2018, but rather a traditional large SUV silhouette like its rivals, the BMW X7 and Mercedes-Benz GLS.

Set to ride on the MLB Evo platform like its siblings, but also the Bentley Bentayga, Lamborghini Urus, Porsche Cayenne and Volkswagen Touareg, the Q9 will have reported seating for seven in three rows, although a six-seater option, with two captain style chairs in the second row like the Volvo XC90, will reportedly also be offered.

Sporting the same grille design, despite it being hidden underneath layers of black-and-white wrapping, as with the Q5 and Q7, the Q9 is set to derive motivation from the current selection of TFSI and TDI engines, as well as the plug-in TFSI e. Not ruled out either is the possibility of an all-electric e-tron model as well as possible S and even RS derivatives.

In spite of Ingolstadt disclosing little details about the Q9 since rumours began emerging, production is set to commence either towards the end of this year or in 2022 with sales starting soon after.

As with the marque’s most recent models, expect a production-looking concept-branded model to debut first before the actual derivatives bow in.