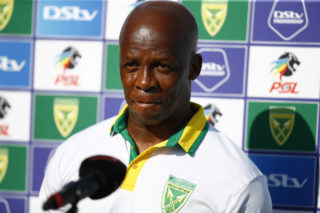 
Golden Arrows have an opportunity to unseat Orlando Pirates on second spot on the log should they beat Tshakuma Tsha Madzivhandila in a DStv Premiership match at the old Peter Mokaba Stadium on Wednesday.

Arrows are currently in fourth place on 32 points after 18 games, whereas second-placed Buccaneers have 35 points from 20 games.

But, for Arrows head coach Mandla Ncikazi, they will be heading to this clash not thinking about the log position, but rather, their own objectives as a team.

“Another tough assignment for our team against TTM away from home. We have been in Limpopo in our last two games (Arrows played Black Leopards in their last game), and this one is going to be difficult. TTM are a good team, they have a lot of good players within their team. And currently they have started getting positive results and it’s going to be difficult. But irrespective of what happens we will still continue facing our objective which is getting a minimum of eight points from five games. And getting maximum points of 15 if it’s possible,” Ncikazi explained.

“So, we don’t even highlight what could happen in terms of position if we were to get maximum points which is what we are planning. A mind of a person works so much with pictures. We don’t want to exaggerate and highlight the picture of what could happen if we get full points. We don’t want to disturb the player’s focus, it’s better if they focus on what we have planned during the pre-season.”

TTM, meanwhile, have their own objectives as well with the club fighting to get themselves out of the relegation zone.

They are 14th on the league table with 16 points after 17 games. Only four points separate Tshakuma and bottom of the log side Black Leopards.