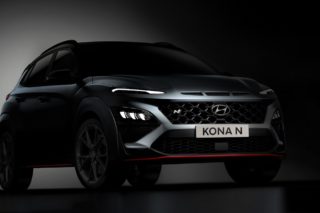 
Hyundai has effectively given the looks of the long awaited Kona N up by disclosing the newcomer in a series of new teaser images overnight.

Teased back in January where it wore significant layers of disguise, the shadowy teasers show red accents on the front skidplate, dual exhaust outlets, a gloss black N specific honeycomb upper grille, a deep lower air intake and red detailing around the faux diffuser at the rear.

In releasing the images, Hyundai also confirmed the fitting of model specific alloy wheels, red accents at the base of the doors and a so-called double wing roof spoiler. Also visible are redesigned front and rear bumpers, a triangular third brake light and as seen by the initial teasers, red N badged brake calipers. Despite not going into detail about the powertrain, the third N model after the i20 and i30 is expected to use the 2.0-litre turbocharged engine from the i30 Performance, which produces 206kW/392Nm.

The unit is anticipated to be paired solely to the eight-speed dual-clutch gearbox as no mention of the six-speed manual or indeed the lesser 184 kW ‘standard’ model has emerged since reports about a performance Kona started gathering momentum last year.

Unlike its N sibling, the Kona N will not be front-wheel-drive but all-wheel-drive, an N first, with Hyundai also revealing the standard fitting of launch control as well as a “variety of high-performance driving features”.

Although not seen as yet, expect the interior to feature several N model touches relating to the seats, materials, steering wheels and detailing.

In spite of the teasers, Hyundai has remained mum on an official unveiling date, merely stating that “more information will be revealed soon”.