A red-bellied black snake has sought shelter in a child’s asthma puffer in a heart-starting moment on Queensland’s Sunshine Coast.

A teenage girl was bringing in the washing at a home in Bli Bli when she saw a small dark snake slither out of the clothes and into the room.

The snake – a baby red-bellied black – had slithered into the open top of a blue reliever puffer.

“It’s one of the most incredible places we have ever found a snake before,” said Stuart McKenzie of Sunshine Coast Snake Catchers.

“I couldn’t imagine picking what it would be like picking it up and discovering it in there.”

Mr McKenzie said the snake was just a juvenile, but could still deliver a nasty bite if provoked or scared.

“They are just exploring, seeking food this time of year before it gets cold again,” Mr McKenzie said.

“We’ve found them in all sorts of places. Just recently we had a snake become stuck inside the tubing of a screen door.” 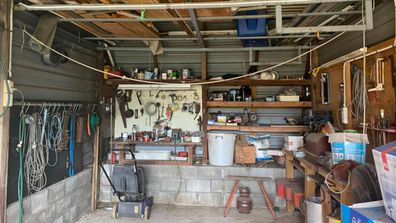 Spot the snake hiding in these Australian homes and backyards

Red-bellied black snakes are common to the east coast of Australia and can be found in both urban forest environments and bushlands.

The snakes are generally not aggressive and will withdraw when approached.

Between 2005 and 2015 red-bellied black snakes accounted for 16 per cent of identifiable snake bite victims, and none of whom were killed.