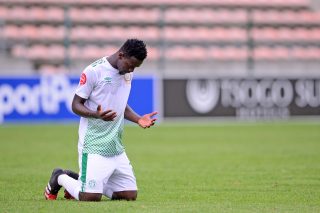 
John Maduka has been impressed with Justice Chabalala’s work ethic at Bloemfontein Celtic, but says his desire to keep the defender at the club will all depend on an agreement between the player’s parent club Orlando Pirates and Siwelele.

Chabalala, who is a Pirates player, is on his second loan spell with Phunya Sele Sele.

The 29-year old first joined Celtic in January 2020, before rejoining the club in September the very same year.

The defender has been an integral part of the Free State outfit starting line-up. Maduka lauded the defender for his recent performance in the club’s unfortunate 1-0 loss to the Buccaneers in the DStv Premiership last Tuesday.

“Chabalala has done well, it’s one of the best games he has ever played today (Tuesday). He was on another level. It’s always great to have Chabalala in the team,” said Maduka.

“I’m still in Johannesburg, the CEO is in Bloemfontein. So, it’s something that we have to sit down and talk about. But remember there is an agreement between the two teams. It’s not about us, Pirates is also involved he is still a Pirates player.

“It’s something that has to be agreed on by the two parties. So, as much as we would love to have him, because he is one of the good players, disciplined, always works hard and gives his best, but remember we are not the only team involved, there is a second party involved. We might want him, but Pirates might want him back as well.”

The Giyani-born player started his football career at Free State Stars in 2015, who are now playing their football in the GladAfrica Championship.

He then joined the Buccaneers in 2016, but was loaned out to Chippa United the following year.

However, the defender’s loan spells away from Bucs have been the cause for his failure to keep a regular place in the line-up, while at Celtic he has managed to break into the team.