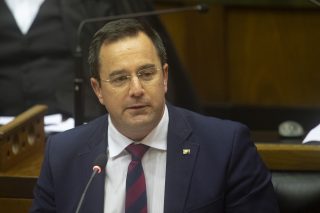 
DA leader John Steenhuisen on Tuesday laid into President Cyril Ramaphosa’s State of the Nation Address (Sona), saying the speech was filled with massive contradictions between “noble-sounding pledges” and the reality of the ANC government’s actions.

Speaking in the National Assembly during a debate on the president’s speech from last Thursday, Steenhuisen said the once “lustrous cloak of the new dawn” from three years ago had turned out to be nothing but “a cheap imitation”.

He said Ramaphosa offered nothing new to the nation in his Sona.

“Of the three years of the Ramaphosa administration, and the Covid-19 and lockdown crisis – one was going to succumb again to the ‘thuma mina’ craze,” Steenhuisen said.

“Aside from a few lines about Covid-19 and the vaccines, this Sona was more or less the same as the one from 2018, 2019, and 2020. The same burning issues are still right there at the top of the president’s agenda.”

He said the president had been paralysed by factionalism and the power struggle within the governing party.

“There is a growing realisation that this president and his government cannot or will not tackle the big issues of the day.

“They’re incapable of making even the most obvious decisions like suspending people who are so clearly guilty of corruption. Let alone the big decisions that we need to be able to breathe reform so that we can revive our economy,” he said.

He said many people thought Ramaphosa was the right person to lead the ANC, but this had turned out to not be the case.

“What many people thought was the best chance that the ANC had of a president that will be able to turn things around, has turned out to be almost no chance at all.”

Steenhuisen added that the Sona debate came at a very difficult time for the country due to the Covid-19 pandemic and the subsequent economic fallout.

He said what the nation needed now was honest leadership.

“If we have any chance of digging ourselves out of a hole we are in, then we have to be honest and truthful about the scale of our problems, the mistakes that contributed to putting us in this position, and importantly, the steps we must take to ratify them,” he said.

Watch the debate below, courtesy of the SABC