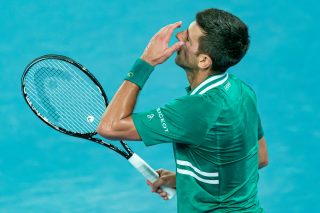 
Top seed Novak Djokovic blamed the mandatory 14-day quarantine for injuries at the Australian Open on Tuesday and demanded a better solution for the tennis season, suggesting NBA-style “bubbles”.

The eight-time winner is one of several players battling injury at the year’s first Grand Slam, where more than 1,000 competitors and officials had to quarantine on arrival in Australia.

Djokovic is carrying an abdominal problem as is Italy’s Matteo Berrettini, who was unable to play his fourth-round match on Monday.

Grigor Dimitrov suffered back spasms during his quarter-final defeat by Aslan Karatsev, and 20-time Grand Slam winner Rafael Nadal also has a back problem.

Djokovic suffered his injury in his third-round win over Taylor Fritz, and said it was the worst he had had to deal with at a Grand Slam.

“What we are seeing is not normal. It’s not something we are used to,” Djokovic said, after beating Alexander Zverev in four sets to reach the semi-finals.

“Obviously it has something to do with these kind of circumstances that we were in. I mean, coming into a Grand Slam and a tournament before the Grand Slam right after 14 days’, 15 days’ quarantine,” he added.

The 33-year-old world number one said players were unhappy at the prospect of further quarantines this year, and said the ATP player council was discussing the problem with managers of the men’s tour.

The coronavirus pandemic wiped out five months of last season and remains a major problem this year in a globe-trotting sport that relies on ease of international travel.

Even after their quarantine, the Australian Open players are now back in a biosecure “bubble” and fans are barred after the state of Victoria went into a snap five-day lockdown to curb a new outbreak.

“Talking to a lot of players, a majority of the players just don’t want to go ahead with the season if we are going to have to quarantine most of the tournaments,” Djokovic said.

“I’m waiting for some answers,” he added.

“I want to understand how our continuation of the season post-Australia is going to look like, because this definitely is not good for players in terms of their wellbeing.”

The Serb said one idea under discussion was playing several tournaments at the same venue, much like the NBA basketball’s “bubble” solution to complete the season last year at Disney World in Florida.

“We have to find a way, whether it’s something like an NBA bubble, because I heard some players talk about that, and I don’t mind to discuss about that kind of idea,” Djokovic said.

“Select one place and we play all the tournaments on that surface and that place. You know, three, four weeks in, three, four, two, three weeks’ rest, then back again. Something like that. I don’t know.

“But we just have to discuss options, because I don’t know honestly if this is going to work.”

Germany’s Zverev also said “we can’t have a travelling circuit right now” and backed the idea of playing multiple tournaments in one venue.

“I think what the ATP should do and should look into is maybe having a venue like here and play multiple weeks at one place,” said the world number seven.

“Multiple tournaments, multiple weeks. Because at the end of the day in Europe right now we can’t have spectators anyways, so what difference does it really make where we play the tournament?”

“We simply cannot have a travelling circuit with how things are going,” Zverev added.