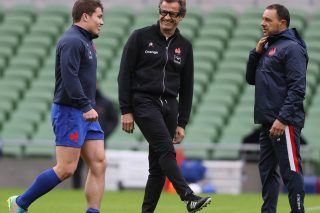 The holding of the Six Nations tournament had been in doubt before it started in early February after the French government called for further guarantees about the competition’s safety protocol.

“In line with the safety protocol in place, the two members of the coaching staff, whose isolation started last night, will continue to isolate for seven days,” the FFR said in a statement.

All the players had earlier in the day been placed in isolation after one of the coaching staff tested positive for coronavirus and Galthie had returned a “suspect” PCR test result and was awaiting the second test that confirmed he had the virus.

However all the players have tested negative, the FFR said.

France’s next match is at home to Scotland on February 28.

Galthie’s squad, who top the table after victories over Italy and Ireland, returned to their Marcoussis headquarters after Sunday’s win in Dublin for a three-day de-brief before a weekend off.

The FFR also said the squad to prepare for the Scotland match will be named on Wednesday.

Earlier this month French Sports Minister Roxana Maracineanu gave the green light for France’s involvement in the championship to go ahead at the “scheduled date, in a bio-secure bubble”.

She had worries about the British variant of the virus which had caused the last two rounds of the European Champions and Challenge Cups to be cancelled.

Galthie’s England counterpart Eddie Jones spent 10 days away from his set-up before the tournament after coming into contact with forwards coach Matt Proudfoot who had tested positive for the illness.