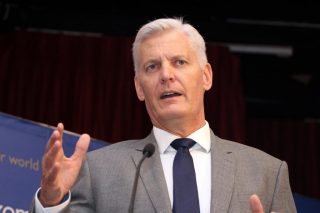 
Despite its plan to complete its reliability maintenance programme by September this year – which has been behind recent bouts of load shedding – it doesn’t look like Eskom will completely eliminate the risk of load shedding.

This according to the power utility’s group chief executive officer (CEO) André de Ruyter, who was speaking during a live podcast streaming on the Free Market Foundation’s (FMF’s) YouTube channel on Monday.

Discussing Eskom’s immediate future with FMF’s Chris Hattingh, De Ruyter painted a sobering picture of the reality of Eskom’s problems, indicating that the road to a fully reliable energy system was a long one.

The reliability maintenance programme intended to catch up on Eskom’s nearly decade-long maintenance backlog was kicked off in earnest around September last year. According to De Ruyter, the final phase of this schedule was set to be completed by September this year.

“Once we have completed this programme of reliability maintenance, we will be able to significantly reduce but not entirely eliminate the risk of load shedding going forward,” he said.

The first tranche of generation units taken offline since September last year would be going back online by April of this year, by which South Africa should expect improved reliability, but not quite an end to load shedding.

“The following tranche will then be taken off, also maintained and we anticipate that by September of this year, we should see a substantial reduction in the risk of load shedding. However as the president has said in his [Sona] address, there is an inherent shortfall in capacity that we need to bridge,” he concluded.

Eskom’s infrastructure mega-projects at the Kusile and Medupi power stations, which were initiated to increase Eskom’s energy generation capacity, have dragged on for the better part of a decade. Despite the mounting bill on these projects, expensive design mistakes in the initial phases of these projects have necessitated another costly infrastructure overhaul, which De Ruyter estimated would only be complete by 2024.

“Because they were done under a lot of scheduled pressure, the quality of the design work was not what it should have been. So design errors crept in and these now have to be fixed and that process is on the go,” said De Ruyter.

“At Medupi we have put into commercial operation five of the six units. Unit one of the operation should come online by the second calendar quarter of this year.”

The estimated cost of taking a unit offline, according to De Ruyter, was R300 million per unit.

Watch the podcast below

WATCH NEXT: Eskom may have found a buyer for their ‘impaired’ R840 million Kusile flats