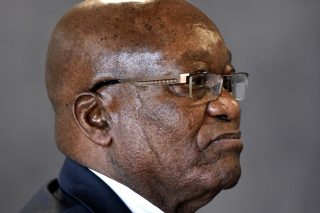 
Deputy Chief Justice Raymond Zondo on Monday dismissed former president Jacob Zuma’s reasons for not appearing before the Commission of Inquiry Into Allegations of State Capture this week to answer questions as compelled by the Constitutional Court (ConCourt).

This after Zuma’s lawyers said in a letter to the commission, dated 15 February 2021, that their client would not be appearing at the inquiry due to his application at the Pretoria High Court challenging Zondo’s decision in November 2020 not to recuse himself from hearing Zuma’s testimony.

“Appearing before Deputy Chief Justice Raymond Zondo in the circumstances would undermine and invalidate the review application over his decision not to rescue himself,” Mabuza Attorneys said in the letter.

ALSO READ: Zuma will not be appearing at Zondo commission this week, lawyers confirm

But Justice Zondo has argued that Zuma’s lawyers were aware that the ConCourt was informed of the review application in the high court.

“When the commission launched its application to the Constitutional Court, Mr Zuma was served with a full set of papers, and his attorneys were given a courtesy copy, as far as I recall from what I was told,” Zondo said.

“’He and his lawyers knew that this was one of the points that were being made by the commission before the Constitutional Court,” he added.

ALSO READ: Jacob Zuma and the men in robes: When a good lawyer is worth his weight in gold

The former president’s lawyers also argued that the commission’s summons issued for his appearance from 15 February 2021 to 19 February 2021 was irregular and not in line with the ConCourt judgement on 28 January 2021.

Zondo said the summons was valid and Zuma was obliged to approach a court of law to challenge them if he thought they were irregular.

Earlier, the commission’s evidence leader, advocate Paul Pretorius, confirmed receipt of the letter from Mabuza Attorneys. He also rubbished the claim by Zuma’s lawyers that the summons issued for their client was irregular.

“As we know, such a summons must as a matter of law be valid until set aside by a proper court,” Pretorius said. “People can’t just form their own views as to what the law might or might not say. And decide what not to do in the face of a validly issued summons… that is valid until set aside.”

Pretorius said Zuma has been implicated in corruption and state capture by several witnesses who appeared at the commission. He said the public had the right to hear from him and he is obliged to cooperate with the commission.

“The failure to appear today does not appear to be justified by any valid reasons, certainly not the reasons given in the letter addressed to the commission,” he said.

Watch the proceedings below, courtesy of SABC News.