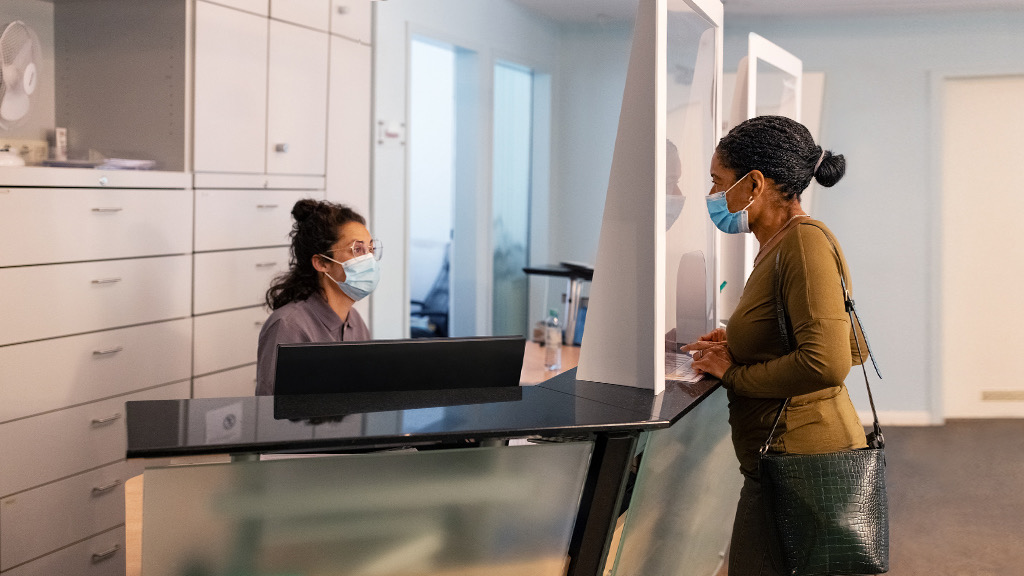 
When Harvard Medical School switched to remote learning last March, Silvia Huerta Lopez went back to her family in New Jersey. She had quarantined for two weeks before leaving Boston, to avoid potentially bringing the novel coronavirus home. But her entire family was already sick and coughing — months later they all tested positive for coronavirus antibodies. The virus swept through her Latino community; many lived in crowded conditions and worked at factories that remained open. “It was terrible. Every week you heard of someone dying,” Huerta Lopez says. “My own grandfather died too.”

Despite fears of the virus, many people in her community wouldn’t go to the doctor. Some called Huerta Lopez with health questions. As a student, she couldn’t answer them, but as a person whose family came to America as undocumented immigrants, she understood the problem. Some people didn’t think they could afford care. Some didn’t believe they were eligible for it. Others were downright afraid to go to the hospital because they feared deportation. She couldn’t fix those ills, but she could help people overcome their barriers to care. And she decided to do this on a larger scale than by answering individuals’ phone calls on her own.

The pandemic disproportionally affects minority populations, but Latinx communities often fare worse than other groups. A team of Johns Hopkins University doctors wrote that while Latinx residents comprised only 5.5% of the Baltimore population, more than 40% of Latinx patients who tested for the coronavirus had positive results — compared with 17.6% of non-Hispanic Black patients and 8.8% of non-Hispanic whites. That disparity, at least in part, stems from the fact that many Latinx individuals are immigrants, and some are undocumented. That means they prefer to keep a low profile and stay away from official institutions, including those that would help with no questions asked.

“There are federally qualified healthcare centers mandated to provide healthcare to everyone regardless of their insurance, immigration status, the language they speak and their ability to pay,” explains Margaret Sullivan, a postdoctoral fellow at Harvard’s François-Xavier Bagnoud Center for Health and Human Rights, who directs a small immigrant clinic at a Boston community center. Yet the individuals often don’t know about these centers, can’t find them, or have to wait a long time for an appointment. “Undocumented immigrants have a very fragmented access to safety-net institutions,” Sullivan says.

To create a better system for her people, Huerta Lopez teamed up with Lianet Vazquez and Brendan Eappen, also students from Harvard Medical School.  Together, they formed an organization that helps immigrants gain access to medical care, regardless of their status, insurance or financials. Named Quetzales de Salud — quetzal refers to an iconic Central American bird, and salud means health — the organization connects immigrants in need of medical care to places that provide it. The name is symbolic, Huerta Lopez explains. “Birds have limitless ability to fly over borders and boundaries,” she says. “We decided on that image to indicate that we will work very hard to overcome whatever barriers that exist.”

The group first built a database of COVID-19 testing sites and federally qualified healthcare centers in New Jersey that treat patients regardless of their status. They also recruited volunteers — bilingual Spanish-speaking medical students who would help walk people through the CDC’s COVID-19 self-checking symptom list and direct them to the testing sites or care centers. The organization does not provide medical advice, as medical students wouldn’t be qualified to do that, the founders explain, and building a real patient care system would pose legal challenges. Instead, the organization simply connects immigrants to the resources they need, explains what rights potential patients have to medical care, and helps translate and de-jargon complex medical topics. “We found a way to make it legal by communicating publicly available medical guidance and connecting people to existing healthcare services,” Huerta Lopez says.

Finding medical student volunteers wasn’t hard, but finding immigrants in need was. When they first launched their effort, the group created an online form where individuals could request help. But that generated few requests — people didn’t know the form existed. So the group worked with Cosecha, a grassroots organization that advocates for undocumented immigrants’ rights. That helped reach a larger immigrant population. Within months, 70 Quetzales volunteers helped more than 200 individuals — and continue working with them.

They also started assisting people with health problems beyond those related to COVID-19. “It was so common that people had other health issues, some of which were chronic,” Eappen says. “So we gradually evolved into connecting them to primary care.” To help people financially, the group started a fundraiser and looked to charity organizations for large sums. “If we can’t cover something, such as surgery, which can be thousands of dollars, we connect people with local community organizations, like churches, that may be willing to pay,” Huerta Lopez says.  Eappen feels that aiding the disenfranchised in navigating the medical system is as important as administering it. “Learning clinical knowledge prepares me to be a good doctor,” he says. “But this bridge to care I am able to provide over the phone is just as impactful as the clinical work I will be doing as a physician.”