How can female founders become the new normal in Asia? 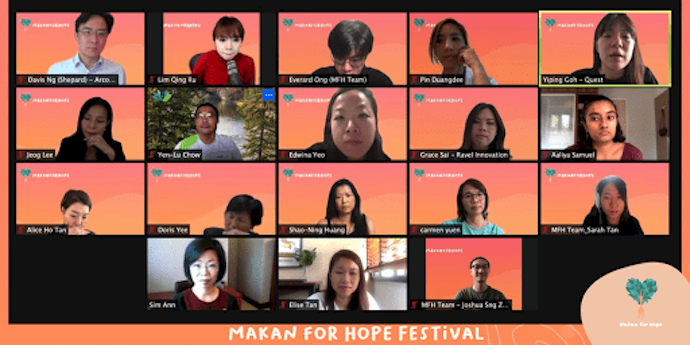 This article is run in collaboration with Makan For Hope, a non-profit initiative by Asia Startup Network. The Makan For Hope Festival brings notable mentors and aspiring entrepreneurs in 30 meaningful virtual conversations over food from Social Enterprises to raise S$125,000 for Fei-Yue to support the children and seniors from low-income families.

At this Makan For Hope session hosted by exited entrepreneur and investor Qing Ru Lim, she led the discussion with 10 seasoned startup founders, angel investors, and venture capitalists.

The roundtable took a deep dive into the headwinds women faced and discussed the steps we can take today to empower female founders and encourage more to thrive in the Southeast Asia startup scene.

Globally, venture funding allocation to female-founded companies is an astonishingly low percentage –two per cent in 2020, according to Crunchbase News.

The number is nine per cent in female co-founded companies. In Southeast Asia, the numbers are higher, though still on the low side: companies with female founders or co-founders raised 16.4 per cent of total funding.

Yet, according to a BCG study, women-led startups provide better financial returns for investors — for every dollar of funding, they generated a return of 78 cents. In contrast, male-founded startups generated less than half that.

Also Read: Levelling the playing field: How to build a home for women in tech

Data from both sides of the table suggest that females could outperform their male counterparts.

Now more than ever, we need to support more females in startups

Besides the strong hypothesis that women make great entrepreneurs, the other reason for this urgency is the COVID-19 pandemic.

More women than ever are leaving the workforce, as shared in McKinsey’s Women in the Workplace study. Without deliberate intervention, as the report suggests, it will be “unwinding years of painstaking progress toward gender diversity.”

It would also hold our economy back. Furthermore, there has been increasing investment into ESG funds to support the empowerment of women and minorities.

The timing is favourable, and there is no matter time to act than right now. But how can we increase the number from 16.4 per cent to 50 per cent?

What needs to be done, what needs to be changed? At the roundtable conversation, most believe that change needs to happen at all levels, and women also need to lead the change themselves.

More can be done to sustain the growing trend of females in tech:

At the Government level

One of the initiatives led by the Ministry of Social and Family Development is the “Conversations on Singapore Women’s Development” which aims to shift societal mindsets for a more inclusive society for men and women. While progress in recent years has been encouraging, we can do much more.

At the Investor level

Investors could pave the way to empower more female founders. Women in startups often face headwinds of blinds spots and cognitive bias, making fundraising even harder than it already is.

A recent study conducted by TechCrunch found that women are asked more risk questions than men, which ultimately results in far less money being raised.

Even more surprising is that female investors typically exhibit the same gender bias demonstrated by their male counterparts towards female founders. And for most of them, they may not even be aware of it.

At the personal level

To see sustained change, females also need to start with changing their own mindset and behaviour.

Also Read: How the tech industry can become friendlier for women

The group’s ideas boiled down to five priority areas for action:

Banding Together is how we can realise the vision of seeing female founders as the new normal.  Here’s how you can play a part— support these ground-up initiatives listed here.

This article is co-written by Jessica Bong.

The post How can female founders become the new normal in Asia? appeared first on e27.