How Gaza’s only accelerator nurtures tech startups amid political unrest 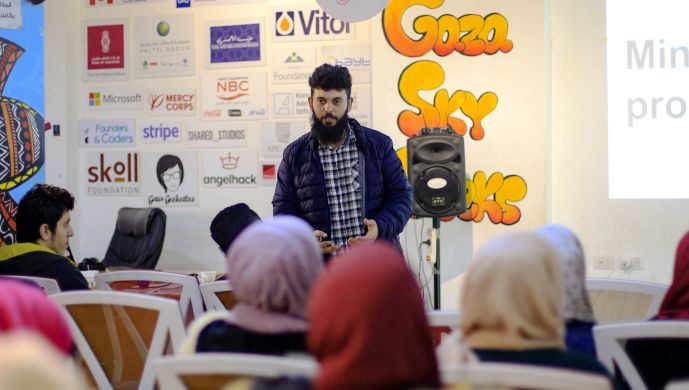 For many of us who are excited about the advent of 5G, it would be hard to believe that there is still a section of the population out there, who struggles for basic needs such as electricity, 3G, open borders for travel and safe working environment.

But for the residents of Gaza, this is a living reality. For, they have long acclimatised to the deprivation caused by the incessant conflicts between Palestine and Israel dating back to the 1940s.

Needless to say, this has largely affected the tech ecosystem in the region, which has witnessed airstrikes being launched in the middle of a startup pitching competition and startup offices being blown up— incidents that are part of their daily lives.

For a country that has been imprinted with the title “warzone”, it can be challenging to find financial resources and access to global payment gateways, despite having a growing talent.

It is not that investments are completely absent in Gaza; some amount of startup funding still comes in, especially from investors in the Middle East and North Africa (MENA) region. However, investors tend to prefer having physical contact with the founders — a criterion that is difficult to fulfil, because of the travel restrictions imposed on the residents.

Regardless of the piling problems, locals have remained largely resilient and continue to show persistence by bringing new ideas to the table. Even during extraordinarily abnormal circumstances, creativity blossoms but lacks expression because of limited access to resources.

In this article, e27 highlights the efforts of Gaza Sky Geeks (GSG) — the only startup incubator in the city — that provides opportunities for young Palestinian entrepreneurs to kickstart their own startups.

Founded in 2011, GSG is the result of a collaboration between global NGO Mercy Corps and Google for Startups. Since its inception, it has not only been helping founders to launch successful companies but has also been running programmes to help local individuals upskill.

This article is largely focussed on GeeXelerator and its works.

How the programmes are run

According to GeeXelerator’s co-ordinator Yousef Elhallaq, the latest cohort received over 600 applications from idea-staged startups, of which 12 have been selected. The programme is currently being run virtually due to the pandemic.

The equity-free programme runs for 16 weeks wherein startups are provided with mentorship and funding to build on their ideas.

The first four weeks are dedicated towards the idea and market validation and the next few weeks to building an MVP and finding the right marketing strategy to get the product out.

As for the selection process, the founders are asked to send a two-minute video to introduce the idea and the team, from which the best are chosen.

“There is no one strong criterion for founders to join the programme. Basically, we are looking for people who have the passion, skills and knowledge about the sector or the idea. We also focus on the scalability of the idea. The other factor is that the team should have at least one technical founder, so they can build their product during the programme,” Elhallaq added.

Access to global mentors: Even though travelling to Gaza is extremely difficult and requires a special visa or travel permit issued by the Israeli or Egyptian embassy, GSG has access to an online community of mentors from global companies, such as Google, Apple and Facebook.

Access to travel: Individuals are not allowed to leave the Gaza strip, therefore GSG allows founders to go on a field trip once a year to neighbouring countries to get more exposure.

Simpler to register a company: Thanks to its good relations with the government, GSG has made company registration easier for founders, which otherwise is a cumbersome process.

Innovation in a mysterious market

While Palestine might not have the best resources, Elhallaq shares that the region has one of the highest educated population in the world — about 90 per cent of all the residents in Gaza are university graduates.

A large part of innovating in Gaza involves self-learning because of the lack of global resources, which is also part of the reason why GSG runs programmes to upskill individuals via Codeacademy, so that they can bring their idea to life or get them matched to other co-founders.

Hakini is one of the startups being incubated at GSG. Founded only three months ago, the firm focuses on increasing access to mental health resources and service in the Arab world and has already acquired 150 users.

The other is Tourud, which provides delivery services for e-commerce businesses. According to Elhallaq, establishing online businesses via social media handles such as Instagram and Facebook is very popular in comparison to setting up websites. Since Tourud takes care of delivery, it is easier for small business owners to focus on the core product.

There are a few popular startups in the region (not part of GSG), including Tashkeel3D, a 3D-printing service that provides customers with medical equipment; and Mummy Helper, a platform that gets Arab mothers to receive support on parenting.

E-commerce currently remains one of the popular sectors in Gaza, after health and education.

Pitching round at GSG

While this is only one side of the coin, tech in Gaza is largely under political pressure which disallows it from reaching its fullest potential. Luckily, since the world is not defined by physical borders, there are many ways for mentors, investors and founders from Southeast Asia and other parts of the world to contribute towards empowering the ecosystem in Gaza.

Here are some ways to support Gaza’s tech ecosystem:

1. Mentorship support: While GSG already has more than 300 mentors from global companies such as Apple, Facebook and HSBC, it constantly looks to recruit new mentors, who can not only share their experience and knowledge about the software development and entrepreneurship but also about freelancing and self-growth. There are no specific criteria to be a mentor, and anyone can apply to join the network.

2. Hiring Gazan talent: Through the Codeacademy platform, Gazan talent can be supported by hiring talented developers and designers at a cost that is lower than most countries.

The post How Gaza’s only accelerator nurtures tech startups amid political unrest appeared first on e27.