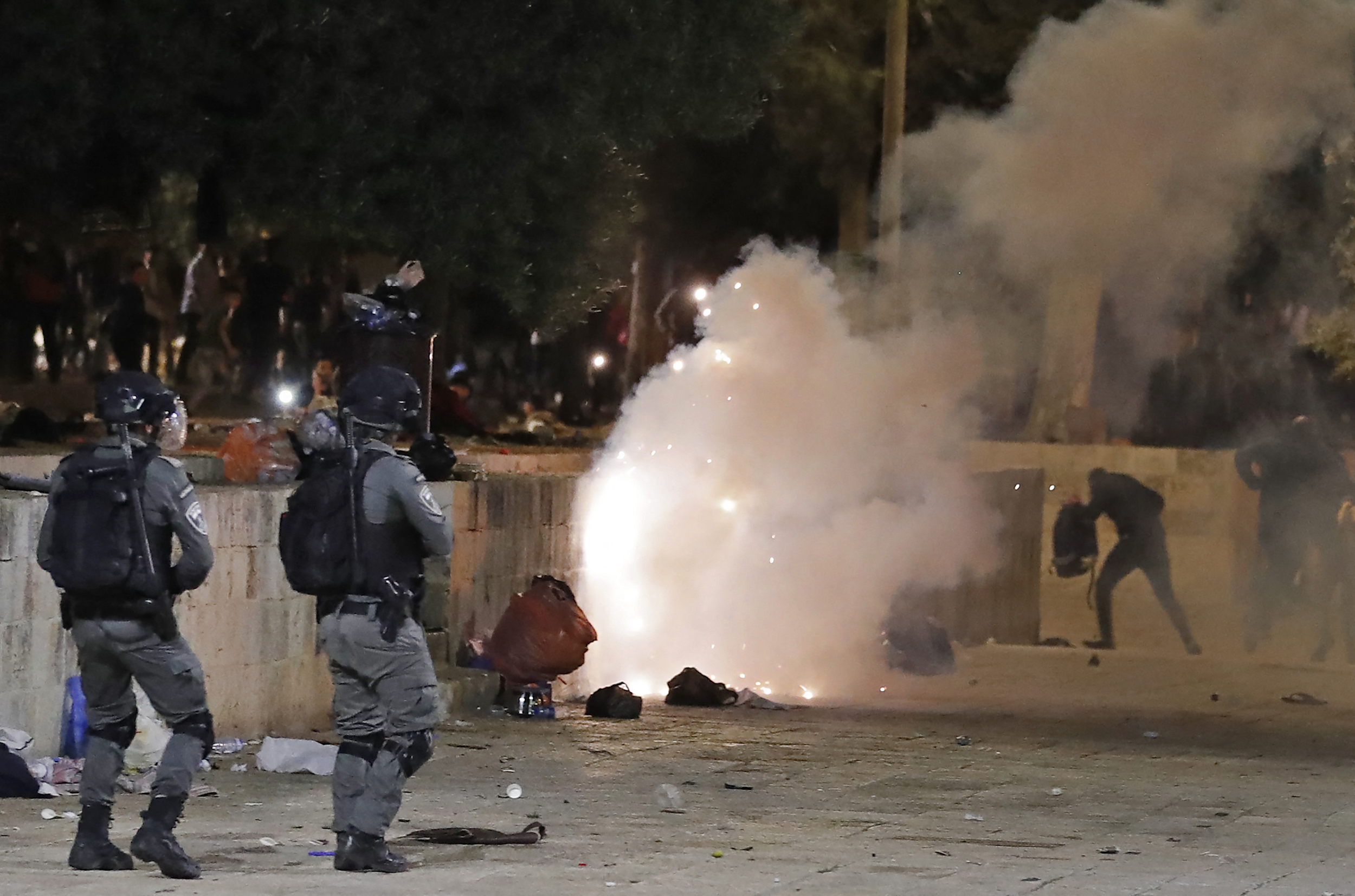 Stones, bottles and fireworks were hurled at officers who fired rubber bullets and stun grenades at the crowds.

More than 160 people were wounded when Israeli riot police clashed with Palestinians at Jerusalem’s flashpoint Al-Aqsa mosque compound late Friday, capping a week of violence in the Holy City and the occupied West Bank.

Stones, bottles and fireworks were hurled at officers who fired rubber bullets and stun grenades at the crowds at Islam’s third-holiest site, also revered by Jews as the location of two biblical-era temples.

At least 163 Palestinians and six Israeli officers were reported wounded at Al-Aqsa and elsewhere in east Jerusalem, as the Palestinian Red Crescent said it had opened a field hospital because emergency rooms were full.

Police said officers had restored order because of the “rioting of thousands of worshippers” after evening prayers.

Tensions in Jerusalem have soared in recent weeks as Palestinians have protested against Israel’s restrictions on access to parts of the Old City during the Muslim holy month of Ramadan, and after authorities ordered several Palestinian families to leave their homes to make way for Israeli settlers.

The United States called for “de-escalation”, later adding that the violence was “especially disturbing now, coming as it does on the last days of Ramadan”.

Friday’s unrest came on Al-Quds Day, an annual day of pro-Palestinian rallies held by Israel’s arch-enemy Iran, which also saw many thousands march in majority-Muslim countries across the region and as far as Pakistan.

Palestinian president Mahmud Abbas said he held the Israeli government “responsible” for the unrest and voiced “full support for our heroes in Aqsa”.

International observers urged calm, with UN Special Coordinator for the Middle East Peace Process Tor Vennesland tweeting his concern, and urging all parties to “respect the status quo of holy sites in Jerusalem’s Old City in the interest of peace & stability”.

The clashes erupted as Muslims packed the Al-Aqsa compound to pray on the last Friday of Ramadan.

In 2000, the compound was where the second Palestinian intifada broke out after a visit there by former opposition and right-wing Israeli leader Ariel Sharon, seen as a painful provocation by Palestinians.

Earlier on Friday, Israeli security forces killed two Palestinians and wounded a third after the trio opened fire on the Salem base in the occupied West Bank, police said, with the incident following days of bloody clashes and killings.

On Sunday, a 19-year-old Israeli was fatally wounded in a drive-by shooting at the West Bank Tapuah junction bus stop.

Israeli security forces said they had arrested Montasser Shalabi, 44, near Ramallah, on suspicion of carrying out the attack. Palestinian sources said Shalabi is a dual US national.

On Wednesday, Israeli troops killed a 16-year-old Palestinian when they opened fire on protesters throwing petrol bombs, also in the West Bank.

And clashes have broken out between police and demonstrators in the east Jerusalem Sheikh Jarrah neighbourhood — fuelled by a years-long land dispute between Palestinian refugees and Jewish settlers.

AFP correspondents said around 100 protesters again rallied Friday night in the neighbourhood, with officers using stun grenades and water cannon to disperse them.

The incidents in Sheikh Jarrah and around Damascus Gate — a key entry point to the Old City — left many wounded, the Red Crescent said, adding to the toll of around 22 wounded in confrontations earlier in the week.

Israeli police also said they made 26 arrests between Wednesday and Thursday.

Meanwhile in Jordan — home to a large Palestinian population — hundreds rallied Friday, chanting “we will die for Sheikh Jarrah”.

The nation administered the West Bank, including mostly Arab east Jerusalem, until the 1967 Six-Day War and remains the custodian of Muslim holy sites in the city.

The Jewish plaintiffs claimed their families lost the land during the war that accompanied Israel’s creation in 1948, a conflict that also saw hundreds of thousands of Palestinians displaced.

The Sheikh Jarrah families have provided evidence that their homes were acquired from Jordanian authorities, who controlled east Jerusalem from 1948 to 1967.

Israel’s Supreme Court is to hold a new hearing in the case on Monday.