Medicaid and State Financing: Key Indicators to Watch Through Pandemic and Recovery 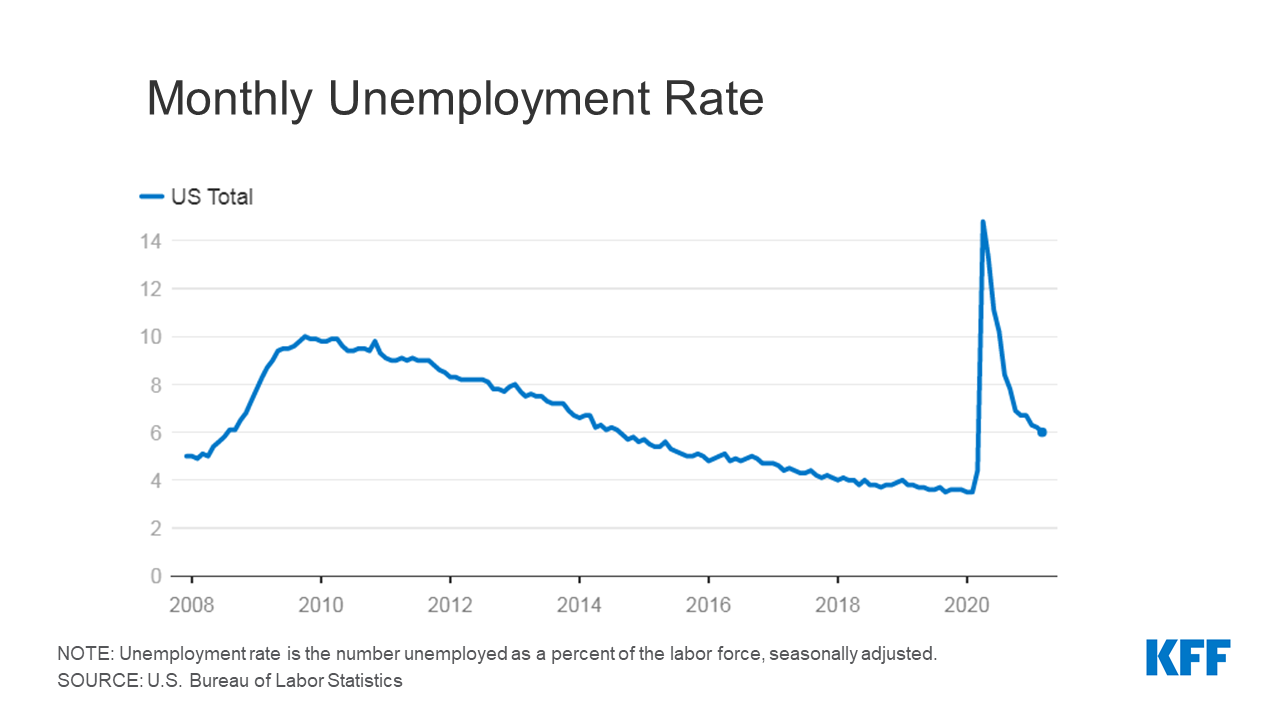 
The health and economic effects of the pandemic have significant implications for Medicaid.  Medicaid, which provides coverage of health and long-term care for low-income residents, is administered by states within broad federal rules and jointly funded by states and the federal government. Medicaid is a counter-cyclical program, meaning that more people become eligible and enroll during economic downturns; at the same time, states may face declines in revenues that make it difficult to fund the state share of funding for the program. As in past economic downturns, the federal government has provided additional financial assistance to states during the current pandemic to help them maintain their Medicaid programs at a time of growing need.  This brief presents the most current data for key indicators to help understand how various economic factors that could affect Medicaid enrollment and spending are changing in light of the pandemic.  An overview of the methods is in the Methods Box at the end of the brief, and a companion brief provides an overview of Medicaid Financing Basics.

What factors could affect Medicaid enrollment?

Medicaid enrollment is typically the primary driver of spending.  Administrative data for Medicaid show that after declines in enrollment from 2017 through 2019, total enrollment nationwide began to grow after February 2020, right before the pandemic began. Between February 2020 and November 2020, enrollment steadily increased to 78.9 million, an increase of 7.7 million, or 10.8%, from actual enrollment in February 2020. These trends in enrollment likely reflect changes in the economy as more people experience income and job loss and become eligible and enroll in Medicaid coverage as well as “maintenance of eligibility” (MOE) provisions in the Families First Coronavirus Response Act (FFCRA) that require states to ensure continuous coverage to current Medicaid enrollees to access a temporary increase in the federal Medicaid match rate.

Key economic indicators that could signal changes to Medicaid enrollment include those showing job and income loss such as the unemployment rate, unemployment insurance claims, and the employment-to-population ratio.  Unemployment rates and unemployment insurance filings capture people who are actively looking for or have recently lost employment, respectively, and may be affected by people who opt to leave the workforce altogether.  Employment-to-population ratios capture what share of the population is working overall.  All measures capture some aspect of income loss, which could make more people eligible for Medicaid. However, Medicaid enrollment changes may lag behind changes in broader economic metrics.  For example, when unemployment rises, increases in Medicaid enrollment may follow, but improvements in unemployment may not immediately translate to slower Medicaid growth. This effect was observed following the end of the Great Recession in 2009 when Medicaid spending and enrollment continued to grow in 2010 and 2011 and is due in part by MOE provisions that prevent states that accept additional federal funding from disenrolling Medicaid beneficiaries.

Employment-related economic consequences are directly related to the proportion of jobs a state has in more impacted sectors. States, like Hawaii and Nevada, which rely heavily on more exposed sectors (restaurants and bars, travel and transportation, entertainment, etc.), have seen larger changes in job-related indicators. On the other hand, states more reliant on less exposed sectors, like agriculture in the Midwestern states, have fared better. The leisure and hospitality industries experienced the highest unemployment rates at the start of the pandemic, but other industries also reliant on in-person work, like mining, are now seeing higher rates of unemployment. Many individuals enrolled in Medicaid even before the pandemic are employed in exposed sectors (such as food and other service industries) and are particularly at risk for income or job loss. Additionally, state issued stay-at-home orders and personal social-distancing behaviors varied across states and also contributed decreased economic activity.

What factors could affect states’ ability to finance Medicaid?

States generally fund their share of Medicaid costs through general revenue collected from residents, businesses, and sales taxes. States must adopt balanced budgets, so during economic downturns when demand for services and programs like Medicaid increases, state revenues typically decline, putting pressure on state budgets.  To provide broad fiscal relief to states and to help support increases in Medicaid enrollment, the Families First Coronavirus Response Act (FFCRA) authorized a 6.2 percentage point increase in the federal match rate (“FMAP”) for states that meet certain “maintenance of eligibility” (MOE) requirements. The additional funds were retroactively available to states beginning January 1, 2020 and continue through the quarter in which the PHE period ends. While the current PHE declaration expires 90 days from April 21, 2021, the Biden Administration has notified states that the PHE will likely remain in place throughout CY 2021 and that states will receive 60 days-notice before the end of the PHE.

Measures of changes in state revenue can provide insight into states’ ability to finance the state share of Medicaid.  State revenues are largely dependent on revenue from personal income taxes, corporate income taxes and sales taxes.  The share of revenue coming from each of these sources varies, and  9 states have no personal income tax at all.  In addition, each type of tax may be affected differently by changes in economic conditions.

There is considerable variation across states with regard to changes in revenues. Overall, 18 states experienced a decline in average monthly total tax revenue for the most recent 12-month period compared to the prior year. Changes in overall average monthly tax collections ranged from a decline of 49% in Alaska to growth of 11% in Idaho for the most recent 12-month period (March 2020 to February 2021) compared to the prior year, and there was also variation by revenue source.  Since the pandemic has disproportionately affected low income workers in the service industry, most states experienced smaller declines in personal income tax revenue than expected, especially for states with progressive income tax structures, where people with higher incomes pay a higher share of income tax.  In addition, income tax withholdings on the supplemental federal unemployment benefits may have also sustained state income tax revenues.  States that issued stay-at-home orders saw reduced sales tax revenues, and states that rely heavily on tourism, like Hawaii, Florida, and Nevada, or oil and gas, like Alaska and North Dakota, experienced larger revenue declines.  Sales tax revenues were bolstered by $600 weekly federal unemployment benefits under the CARES Act that allowed consumers to continue spending and a 2018 Supreme Court decision that authorized states to collect sales tax on online purchases. While sales taxes on groceries have been shown to worsen income and racial inequalities, states that tax groceries saw smaller declines in sales tax revenue during the pandemic.

The ongoing health and economic effects of the pandemic will continue to have implications for Medicaid enrollment and financing.  As states adopt budgets for state fiscal year 2022 (which starts July 1 for most states), revenue and spending projections are likely to incorporate potential improvements in revenue tied to COVID-19 vaccination efforts and eased restrictions, the continuation of the temporary fiscal relief and continuous coverage requirements for Medicaid (tied to the duration of the PHE), and new federal stimulus funds that were part of the American Rescue Plan. While revenues and employment indicators are improving, there is a lot of variation across states.  In addition, while indicators are improving on average across states, it is unclear how quickly and how much jobs and revenue in certain sectors of the economy will improve.  As the economy improves, what happens in certain sectors could greatly affect Medicaid as there have been disproportionate effects on low-wage workers who could be eligible for Medicaid.