Endometriosis pain exclusive: What is it, symptoms, case study

Taylor Gartner was still a teenager when a doctor advised her to start thinking about having a baby – not in the years ahead, but right away.

Ms Gartner had newly turned 18 when she was confronted with the diagnosis the chronic pelvis pain she had lived with for the past five years was in fact endometriosis.
It left the then-Western Australian student facing the prospect of years of surgery that could affect her chances of falling pregnant. It was overwhelming.

“That led to a lot of mental health difficulties for me, being told that I might not be able to be a mum,” the now 25-year-old told 9News.

“I know that’s something that gets told to a lot of young women when they are diagnosed with endo… I don’t know confidently whether it will impact on my chance of being able to conceive. It may or it may not.

“But that is something that I think about and has had quite a bit impact on the way I live my life.”

Ms Gartner’s first experience with pelvic pain was when she was about 13 or 14, suffering through severe periods with heavy bleeding. Then, the pain dramatically intensified outside her cycle.

‘I was curled up in a ball, I was inconsolable, I was crying. It was really the worst pain that I have to-date experienced’

“When I was younger it sort of started to escalate so at the beginning it would kind of be like one or two days of my period would be so bad that I wouldn’t be able to go to school or I’d miss some classes throughout the day,” she said.

“And then as my pain persisted it got a little bit more complex. So, I was having pain on different days in the month, not just when I was bleeding and different kinds of pain. So, it got to the point where it was disruptive throughout the month, not in just one point in the month.”

She describes the pain at its worse as debilitating.

“I was curled up in a ball, I was inconsolable, I was crying. It was really the worst pain that I have to-date experienced,” she said.

“I think it is quite a taboo topic. It wasn’t necessarily something that was spoken about very freely and when it was, it was more ‘oh you’ve just got your period’ and ‘you need to toughen up, you’re being a sook or you’re being weak'”.

Endometriosis Australia describes the disorder as when the tissue that is similar to the lining of the uterus (womb) occurs outside this layer and causes pain and/or infertility.

One in nine women are affected by endometriosis, representing about 200 million worldwide.

On average, it can take more than six years for those living with endometriosis to be diagnosed. An endo diagnosis can only be given through surgical intervention.

Symptoms of the condition include cramping, bloating, fatigue and nausea.

Dr Susan Evans, co-founder of the Pelvic Pain Foundation of Australia, said in her experience women find it very difficult to find all the support networks and practitioners to manage their pain.

“One day, I believe we will find the underlying cause that includes both endometriosis and chronic pain but right now, we don’t know what that is and so we have to manage the symptoms as they are present,” Dr Evans told 9News.

“So, unfortunately it comes down to each individual woman considering the different aspects of their pain, taking the time to learn a lot about it themselves so they can be discerning consumers of the health services available to them.

“When we think of Australia, there’s probably a million women with pelvic pain in Australia. Services are hard to find and that’s where at the Pelvic Pain Foundation we’ve done our best to provide online services that can help women no matter where they are.”

The normal, not normal pain

In the early days of her pain, Taylor Gartner popped anti-inflammatories and paracetamol back-to-back at the max dosage. She also relied on heat packs, baths and showers, the warmth offering subtle relief. She even tried a hormonal treatment, so she could skip her periods.

Yet, as it was familiar pain for her mother and grandmother, Ms Gartner said she grew up with the pain being normalised in her home environments and felt well supported.

“I think you end up internalising it and you do think that you are weak and that it is normal and you should just kind of get on with it, to the point where I didn’t really explore my pain,” she said.

“I think I’m very lucky in that even though it was quite normalised and they didn’t necessarily think anything was wrong with me, they were very supportive of my pain and were definitely there for me. I feel very lucky in that regard.”

Ms Gartner finally learned of her endometriosis diagnosis after a visit to a gynaecologist for another matter. It was then she was told her level of pain was not normal.

She underwent a laparoscopy – a common and minor procedure – which backed up the specialist’s suspicions. She had severe endometriosis lesions, which were treated while Ms Gartner was under the general anaesthetic.

“I would say I was never out of pain after my procedure, but it definitely lessened my pain,” she said.

“I noticed a difference, definitely for a year post. But I was still in pain and I guess the way it was discussed with me at the time was that you would just have ongoing surgeries. I definitely thought there had to be a better way or another way.”

Ms Gartner went on to have another surgery a few years later, which offered some relief but not enough. At the time, she was studying to be a speech pathologist.

“In my early 20s I still had a lot of pain so I missed work, I was studying at the time so I would miss university classes. I had to miss exams which was really difficult for me… I think particularly because you can’t see endo it’s often called an invisible illness,” she said.

“It was hard to explain to my boss or my teachers or friends why I couldn’t come to certain things.”

It was after her second surgery that she focused her energy on options outside the operating theatre.

“I think for me it was about becoming proactive and active in my healthcare and becoming informed, so doing my own research and getting a bit of a team around me,” she said.

“So, not just a surgeon but other healthcare professionals and combining everybody’s expertise and applying it to my life and my circumstances. And that’s when I noticed a shift in my pain.”

She said it was the holistic aspects of life – such as mental health, reducing stress, exercising and avoiding inflammatory foods that helped with her pain. 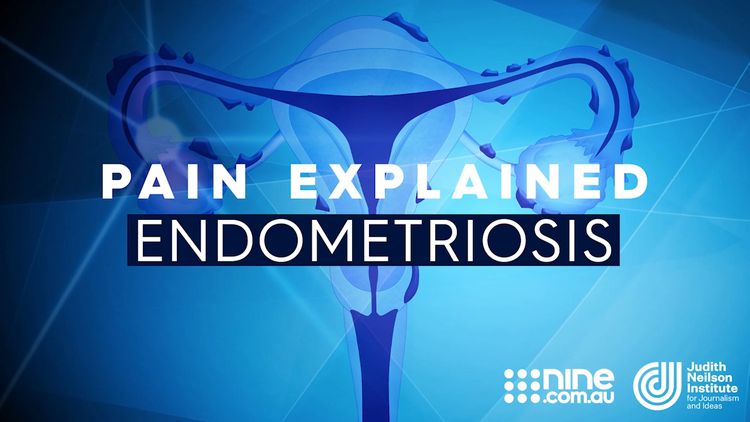 “I think with more information coming out about endo, there’s been a lot more support networks and support groups and it really nice to know that people are experiencing thing,” she said.

Dr Evans said it is her hope that one day there will be better education for all health practitioners so a wide range of practitioners understand “the big picture”.

“Those who don’t just manage their tiny little area, but think about outside and know how to recognise the different types of pain and either manage it themselves or know how to advise her as to who can help her,” she said.

“We’ve had too much reliance on surgery or just hormones and she (women) deserves a much broader approach. At the moment, that’s hard for her to find.”

Ms Gartner, a former speech pathologist, is now a clinical educator who focuses on period pain. She visits high schools teaching students about the signs of pelvic pain.

“I would say that it’s really hard to live with pain and if your pain means you’re missing out on things you would typically do and things you want to do, that’s not normal and it’s important that you do access support and speak to somebody that you trust about that,” she said.

“I think we’re very lucky that we live in an age where there is a lot information online, there’s a lot of support network online.

“If you don’t have that support network around you right now, there’s definitely people who are willing and able to help you through that.”