The 32-year-old man from Wollongong, New South Wales, was fishing with three friends last Saturday night on South Alligator river in the Kakadu National Park, when the croc launched its self into the boat.

“The man received a graze to his flank after a crocodile launched into the boat, attacking his seat and injuring the man,” an NT Health spokesman said.

NT Health said the man was treated the next day at Jabiru Health Centre in the small town of Jabiru, but no longer needs care.

Kakadu National Park is now looking for the crocodile, it said.

“Kakadu National Park Compliance and Wildlife Operations Team is searching for the crocodile involved in the incident,” a spokesman, said.

“Crocodiles exhibiting aggressive behaviour are captured and assessed before being relocated.

“Consultation with Traditional Owners takes place before a decision to destroy a crocodile is taken. 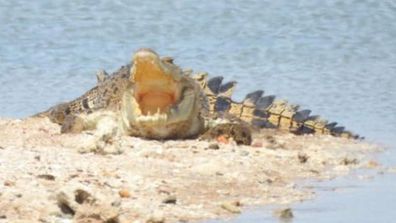 “Kakadu National Park encourages all visitors especially when near waterways to be Crocwise.”