Mobile speed and phone detection cameras are being destroyed in NSW


Angry drivers are attacking controversial road cameras as backlash mounts over an explosion in fines for traffic offences.
Material obtained by 9News under freedom of information laws reveals a spate of attacks on moveable speed cameras and mobile phone detection cameras in NSW.
They include a hammer attack on four CCTV cameras mounted on a mobile phone detection camera trailer, punctured tyres, another being set on fire and graffiti sprayed on a third one.

“I can understand the anger, but they need to understand every dollar raised goes back into road safety.”

Official reports also detail a string of attacks on operators of mobile speed camera vehicles, who park on the side of roads so cameras lodged inside the boot can catch drivers through the rear window.

They have been egged, abused, had bottles and food thrown at them and intimidated by drivers.

“Public aversion to mobile speed camera enforcement” is cited as a key cause of incidents in several of the reports.

The NSW Government’s decision to dramatically ramp up enforcement of speed and mobile phone offences by removing warning signs has been controversial – and ignited a record jackpot in revenue.

Mobile phone detection cameras are raking in about $6 million a month – a total of $72.75 million from March last year to March this year.

On top of that, monthly revenue from mobile speed cameras has increased tenfold to as much as $6 million a month since warning signs were removed and vehicles were stripped of reflective signage to become unmarked in November last year.

At the same time, enforcement hours tripled to 21,000 hours a month and cameras programmed to catch drivers travelling in all directions.

Critics say hidden cameras do not change driver behaviour like warning signs do because of the lag between an offence and receiving a fine.

“We believe no warning signs was the wrong policy, warning signs are important they help to address people’s behaviour behind the wheel and what we are seeing is public support for this approach is collapsing,” the NRMA’s Peter Khoury told 9News.

Like undercover speed cameras, which look like regular parked cars, mobile phone detection cameras are hard to spot because they resemble a roadworks trailer or are mounted in gantries. 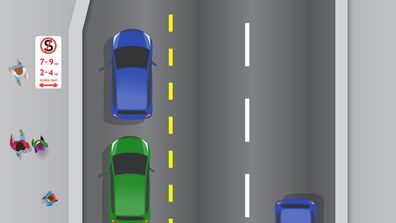 School’s out – but can these parents pick up their kids here?

Facebook groups in which members regularly post new locations of moveable road cameras have sprung up and attracted thousands of followers.