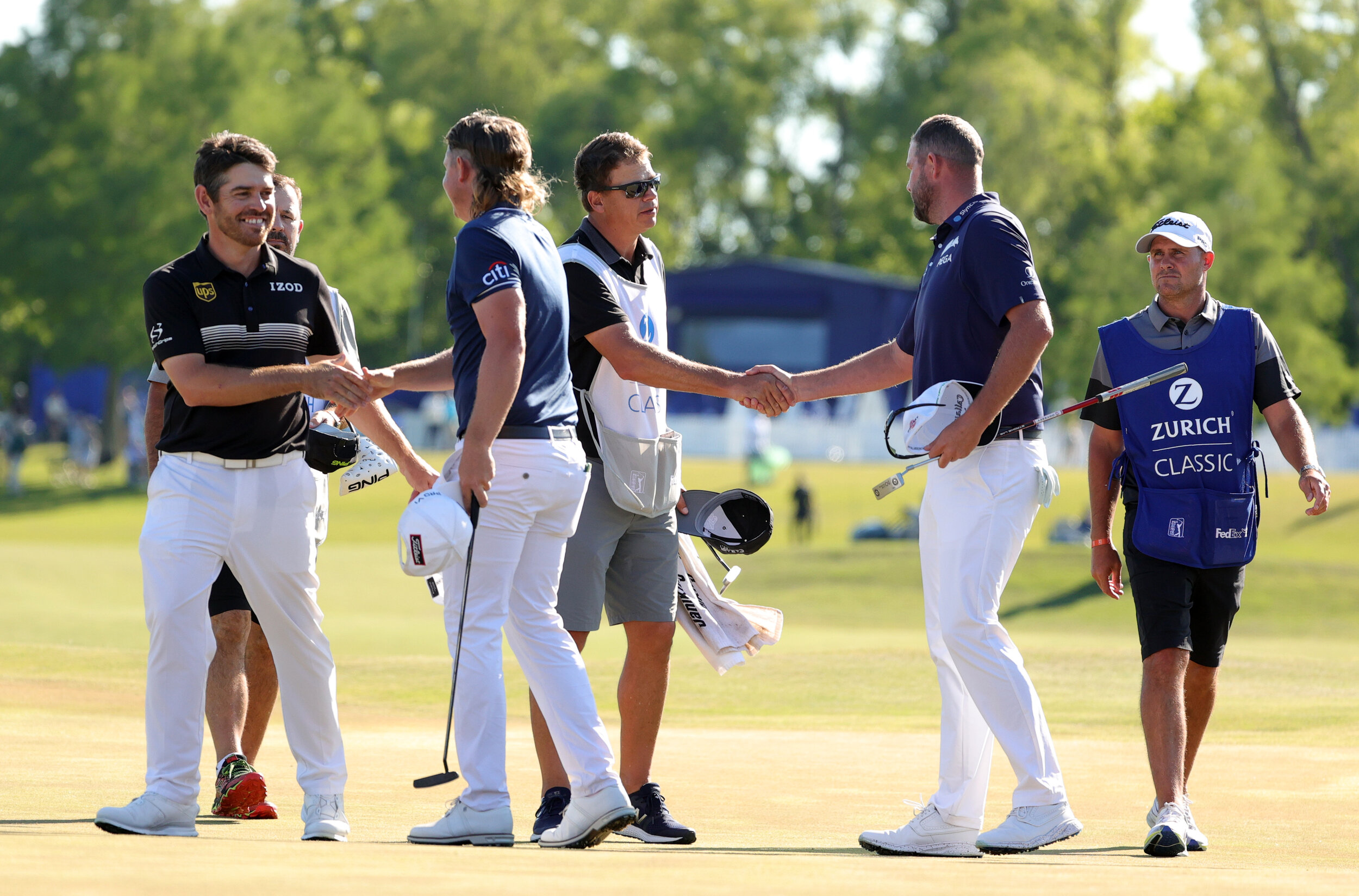 Both teams finished Sunday’s foursomes final round at TPC Louisiana at 20-under 268.

When they returned the par-five 18th to play the first hole of sudden death in alternate-shot format, Oosthuizen put his tee shot into the water guarding the right side of the hole, opening the door to Leishman and Smith.

The Australian pair had started the day one stroke behind Oosthuizen and Schwartzel but pulled level after three birdies on the front nine.

After the South Africans bogeyed the 10th, Leishman and Smith gained a two-shot lead with a birdie at the 11th, only to surrender it with bogeys at 13 and 15 – where Oosthuizen and Schwartzel’s birdie was just the fourth of the day at the tough par-four.

An unlikely birdie at 16 – where Smith was in the water off the tee but Leishman holed a 23-foot chip – saw the Australians pull level again.

They stayed that way as both teams – playing together in the final group – bogeyed 17 and parred 18.

“It’s been a pretty cool week,” said Smith, who notched his third PGA Tour title and his second Zurich Classic crown. teamed with Sweden’s Jonas Blixt to win the tour’s only team event in 2017.

“That back nine was brutal,” Smith said. “But we hung in there and we won.”

The Aussie teammates had fun with the format all week, Leishman paying tribute to Smith’s increasingly famous mullet hairstyle by donning a mullet wig prior to Saturday’s four-ball third round.

The demands of the final-round alternate-shot format left little time for frivolity, but both Smith and Leishman said teaming with a friend for a victory was special.

“We had such a good week on and off the golf course,” Smith said. “Something I’ll never forget for sure.”

“Not very often you get to celebrate together,” he said. “You celebrate with your caddie and your team, but to be able to do it with a fellow player and a mate, it’s as good as it gets, really.”

With that camaraderie in mind, Leishman said he had no intention of giving Smith “a little jab or something” after his teammate dunked his tee shot in the water at 16.

“Cam actually hit a really good tee shot there and just the wind got it a bit more than we thought,” said Leishman, who after the drop stepped up and chipped in for a birdie that pulled them level.

He was so busy celebrating with Smith, Leishman said, he forgot to get the ball out of the hole.

“Louis had to throw it to me,” he said. “It was nice to make that, settle us down a little bit and we were able to finish it off in the playoff.”

Despite the disappointment, both Oosthuizen and Schwartzel were pleased with their round in the demanding foursomes format.

“The idea was to give ourselves as many birdie putts as we can and we did that,” Schwartzel said. “It probably could have gone any way out there today.”

Americans Richy Werenski and Peter Uihlein finished third after combining for a 67 for 269.

Keith Mitchell and Brandt Snedeker moved as low as 20-under before finishing with a 69 that left them on 270 alongside Billy Horschel and Sam Burns and Keegan Bradley and Brendan Steele.