While Australian authorities say Aussies still need an exemption to leave the country except for going across the Tasman, officials there have said they won’t stop Australians leaving the nation to travel anywhere else.

However, Australian’s Border Force warned if people do travel onwards it won’t be easy to get back home because of the strict flight caps limiting the number of passengers allowed into the country.

A New Zealand Customs spokesperson told 9News it has “no power” to stop Australians travelling onwards from New Zealand.

“This is a domestic issue for the Australian Government’s Department of Immigration and Border Protection,” a spokeswoman told 9News.

“The New Zealand Customs Service has no role or power to prevent the further departure of Australian citizens to overseas destinations from New Zealand.”

An Australian Border Force spokesperson told 9News people who want to transit through New Zealand to another destination, “must apply for an outward travel exemption”.

“Australian citizens and permanent residents requesting an outwards exemption must acknowledge the risks of travel, and the limited and high cost of return flights to Australia,” a spokesperson told 9News.

“Those who travel onwards from New Zealand to another international destination must be aware that returning to Australia or New Zealand may be difficult due to the current restrictions on passenger numbers and the availability of flights.

Australians have been banned from leaving the country, outside of some expempted reason, since last March.

Home Affairs says permission can only be granted to go, as part of the pandemic outbreak; for work; for medical treatment; for a ‘compelling reason’ for over three months; on compassionate or humanitarian grounds, or in the national interest.

Only about 6000 people per week can come in, so getting on a flight without having a ticket cancelled is difficult, and can be expensive.

Both nations, outside of the trans-Tasman bubble, have hotel quarantine for 14 days, which costs about $3000.

New Zealanders have been able to come to Australia without quarantine since last October. 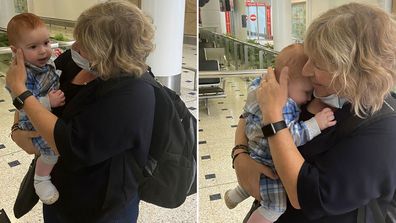