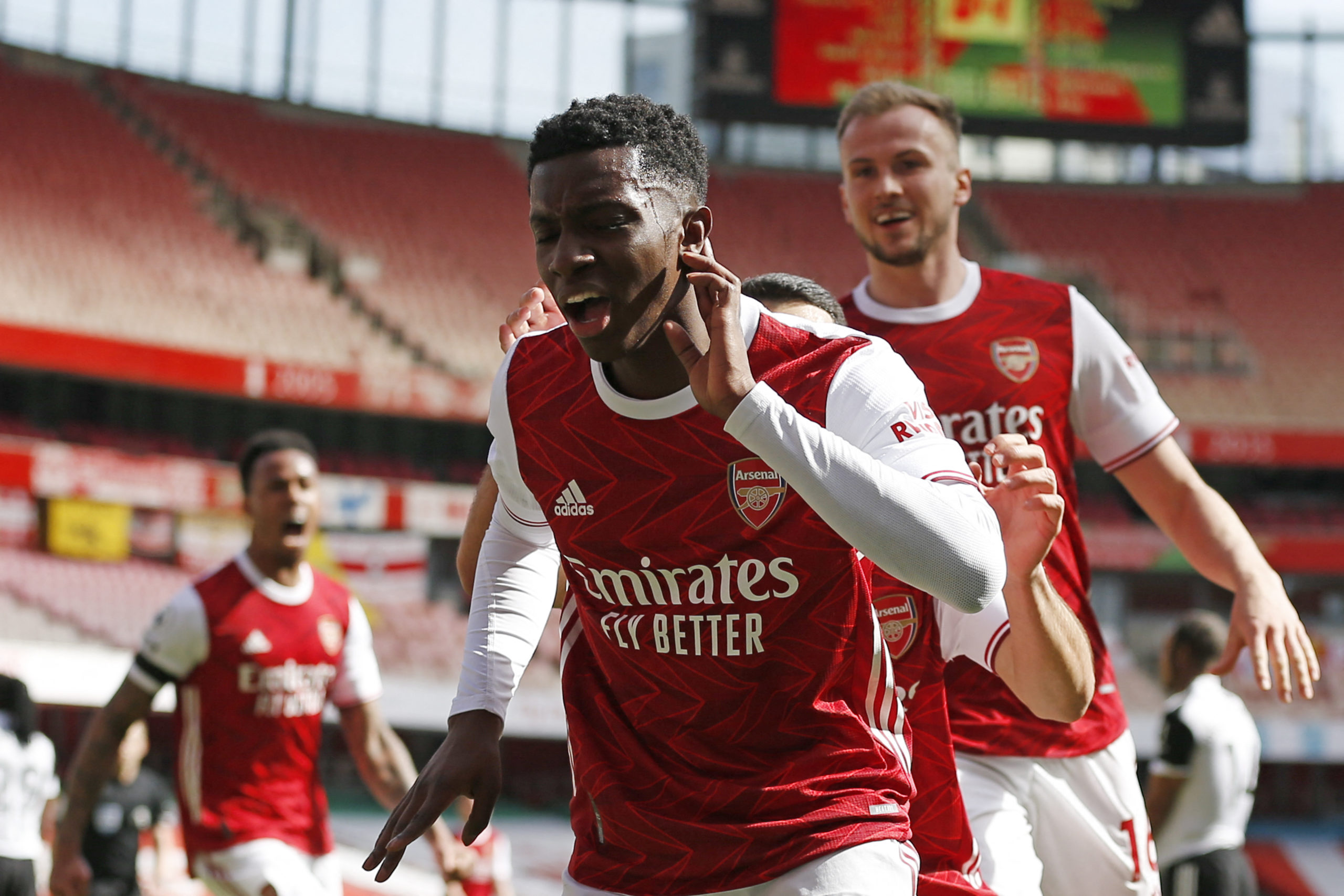 Nketiah pushed Fulham closer to relegation deep into stoppage-time when he tapped in after the visitors failed to clear a corner.

Eddie Nketiah delivered a hammer blow to Fulham’s bid for Premier League survival as the Arsenal striker’s last-gasp goal rescued a 1-1 draw at the Emirates Stadium on Sunday.

Mikel Arteta’s side were seconds away from a first ever home defeat against Fulham as they laboured to find a response to Josh Maja’s second half penalty.

But Nketiah pushed Fulham closer to relegation deep into stoppage-time when he tapped in after the visitors failed to clear a corner.

It was a major setback for third bottom Fulham, who are six points behind fourth bottom Burnley and fifth bottom Brighton with just five games left.

Burnley and Brighton will still have a game in hand on the Cottagers after those matches.

After losing their previous four matches, Fulham were on course to mark Scott Parker’s 100th match in charge with a memorable scalp.

Instead, they slipped closer to an immediate return to the Championship.

“We were so close so it’s been painful. As disappointed as I am now and the team are we’ll wake up tomorrow and we will fight again.”

Ninth placed Arsenal are nine points adrift of the top four and their best hope of reaching next season’s Champions League is winning the Europa League.

Arteta’s men face Villarreal in the semi-finals after cruising to a 4-0 victory at Slavia Prague in the quarter-final second leg on Thursday.

“We have to just focus on the boys playing away in Europe and arriving here with the desire to go all the way to the end,” Arteta said.

“We took risks in the right way, we could have scored three or four, we totally deserved to win the match but put ourselves in a difficult position.”

Arsenal thought they had taken the lead when Dani Ceballos looped his header past Alphonse Areola from Hector Bellerin’s cross.

But the Spaniard was denied his first Premier League goal after VAR ruled Bukayo Saka’s toes were in an offside position in the build-up.

Saka hit the outside of the near post with a cross-shot before Fulham received another helping hand from VAR in the 59th minute.

Mario Lemina was ruled just onside as he burst into the penalty area before making a theatrical tumble after Gabriel stood on his foot.

After a lengthy review, Maja took the penalty, lifting it high into the net for his first goal in nine games and only his third since arriving on loan from Bordeaux in February.

There was more frustration for Arsenal when Alexandre Lacazette limped off injured.

“He felt his hamstring so we don’t know,” Arteta said when asked how bad the problem was.

Bobby Decordova-Reid needlessly conceded a corner and from the set-piece, Arsenal keeper Mat Ryan came up and remarkably rose highest for a header that reached Granit Xhaka.

When Xhaka’s low drive was pushed out by Areola, Nketiah was on hand to break Fulham’s hearts as he tapped in from close-range.