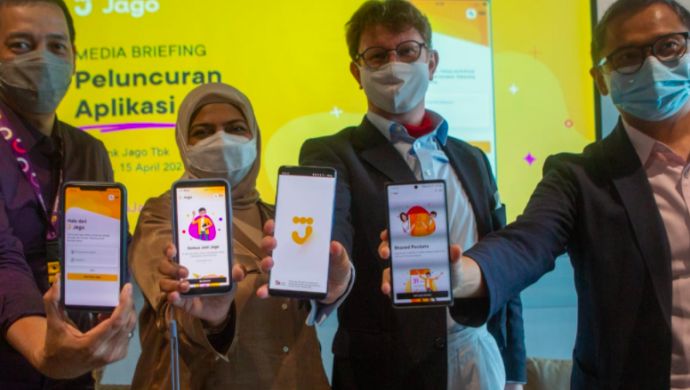 “To present an innovative and collaborative solution, we work closely with the ecosystem. We expect this app to provide greater financial access to accelerate financial inclusion. There are still many segments that we would like to reach out to Indonesia,” said Bank Jago President Director Kharim Indra Gupta Siregar in a launch event in Jakarta.

At the moment, there is a limited number of features available on the app, from remittance, bill payments, to e-wallet top-up. In the future, the company intends to add more features to lure in the digital-savvy, middle-class segment –be it corporates or individuals.

This will include the bank’s strategic partnership with Indonesian tech giant gojek, with will enable customers to open a new bank account on the ride-hailing platform’s app. “As for the partnership with gojek, our team is still working on the integration process,” Siregar said.

Trying out the Jago app

Bank Jago dubbed itself as a fully digital tech-based bank. Siregar also stressed that the platform’s innovation are fully developed by an in-house team.

DailySocial also had the opportunity to try out the app’s features.

Our first impression was that the onboarding process when creating a new bank account was speedy, with an e-KYC process that lasted no longer than 30 seconds via video call. We then tried out the Pockets feature which enables customers to allocate funds for different purposes. As detailed in the image below, users can personalise their Pockets feature by changing its name, colour, and profile image.

A simulation of bank account opening in the Jago app

The interesting part is that customers can invite other account holders (“Collaborators”) to collaborate in saving money together. Customers can allow the other to see or use the funds in that pocket with a daily limit that can be set up.

According to Siregar, the collaborative personal finance management feature is not yet available in most banks in Indonesia. The feature was developed based on research done by the team. He believes that there are still many use cases to be explored in the future.

Considering its relatively new use case, and the possibility for it to fall into the category of time deposit, the feature has to go through a risk management process. “This is a unique challenge for Bank Jago. But we have created a simulation of cash flow to enable us to make adjustments in our service,” Siregar explained.

Also Read: gojek invests in Bank Jago to expand its footprint as a leading payment services company in Indonesia

Meanwhile, according to Bank Jago Digital Bank Director Peter van Nieuwenhuizen, the collaborative feature has a great prospect to be implemented in the Indonesian market, due to the culture’s collaborative nature.

“The [features] that we are developing are new models in the banking industry. This is why we will need one to two years to see how well it works with Pockets, or how to figure out what works best,” van Nieuwenhuizen said.

Another interesting feature that Bank Jago introduced is the bill payment feature that enables non-fixed payments such as post-paid mobile phone bills. Through this feature, users can set up an automatic payment or a reminder to confirm how much to pay.

A flashback of Bank Jago’s journey

Bank Artos rebranded to Bank Jago in June 2020, as part of its part to transform its business following an acquisition by a group of investors led by Jerry Ng through PT Metamorfosis Ekosistem Indonesia (MEI) and Patrick Waluyo through Wealth Track Technology Limited (WTT).

Previously, senior banker and Bank Jago founder Jerry Ng has stated that the collaboration is a key strategy to accelerate the growth of the digital banking business. He gave examples of digital banks in China and South Korea that are focusing on collaboration among ecosystem players, enabling growth through a wider spectrum of products.

This explained the various strategic partnerships in various verticals that Bank Jago has done since 2020. At the moment, only gojek has signed up to become a strategic partner for the company.

“We have to create unique value proposition. What we did was combining both as they each their own uniqueness. Banks are no longer the centre of the ecosystem, instead, it is now part of the ecosystem. If we are able to position ourselves correctly, we will be able to play a strategic role. Because the transaction is the centre of what the customers are doing,” Ng said.

Other digital banks in Indonesia

The competition landscape among digital banks in Indonesia is getting tougher this year. Following the launch of apps by Bank Neo Commerce and Bank Jago, other banks have also begun to anticipate the competition by launching a digital bank. We noted several names in the list such as Bank Digital BCA, SeaBank, and KB Bukopin

Bank Agro is applying for a digital bank license to Financial Services Authority (OJK), following the appointment of Kaspar Situmorang as Managing Director. He was previously Executive Vice President Digital Center of Excellence, a digital transformation division at BRI.

Last year, Indra Utoyo, Digital, IT and Operational Director at BRI, told DailySocial that there is a great potential for BRI Agro to be converted into a digital bank as it has launched digital lending platform Pinang (Pinjam Tenang). This platform serves as an early test case for the market.

SeaBank, which had changed its rebranded from its original brand Bank Kesejahteraan Ekonomi (BKE), has also been reported to consider acquiring other banks to strengthen its capital structure, enabling it to secure digital bank licence. SeaBank still falls under the BUKU II category in Indonesia with an IDR1.3 trillion (US$89 million) capital by September 2020 and a total asset of IDR3.6 trillion (US$246 million) by December 2020.