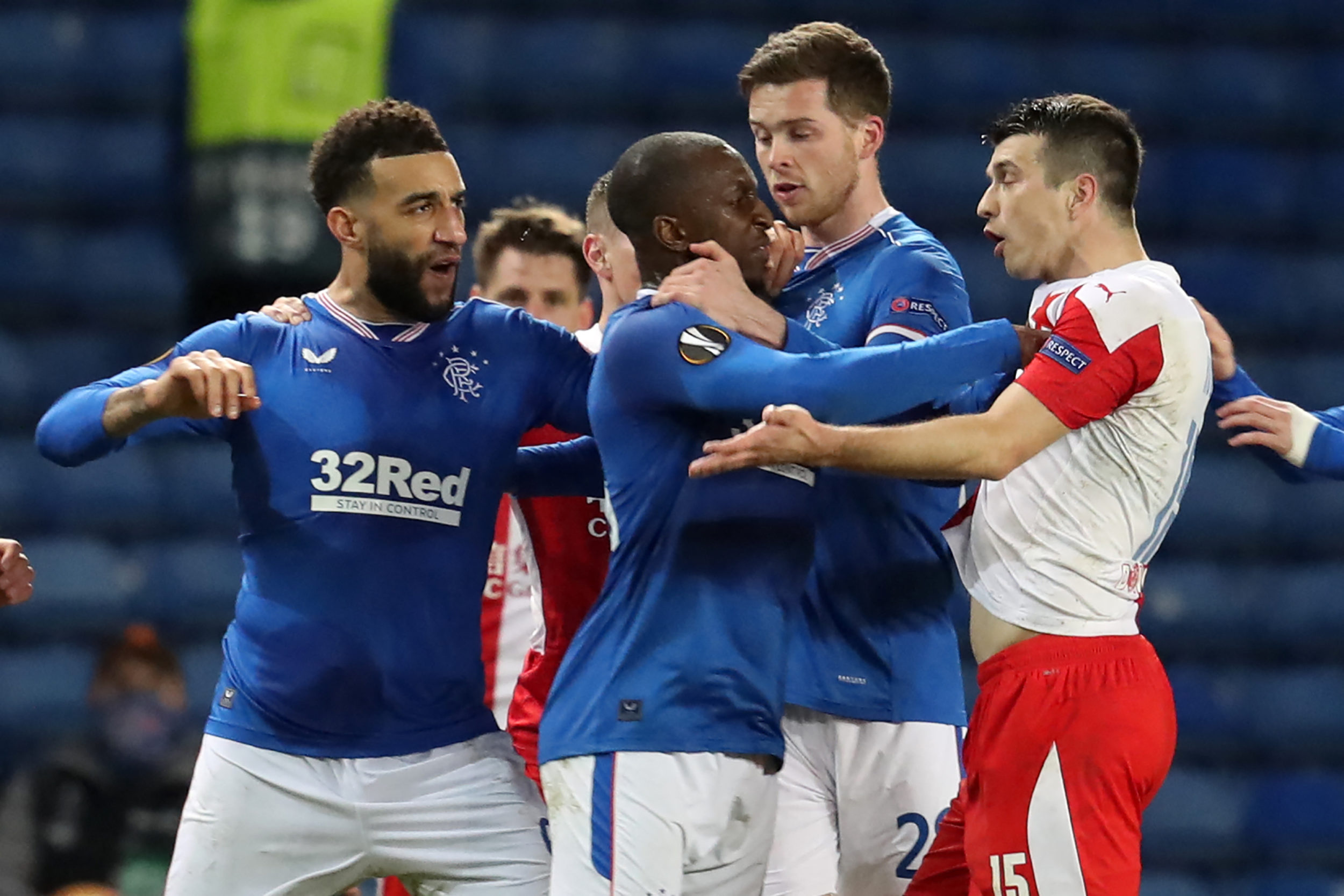 Kamara has been suspended for three matches in UEFA club competitions for an “assault” on Kudela that reportedly took place in the tunnel after the match at Ibrox on March 18.

“We welcome the suspension imposed on Ondrej Kudela. This not only vindicates Glen Kamara’s evidence but underlines the severity of the comment, given the number of games has been imposed by UEFA,” Rangers said in a statement.

“Nevertheless, we believe the sanctions imposed on our two players (Glen Kamara and Kemar Roofe) are severe. We have written to UEFA, seeking clarification in writing on the basis that we intend to appeal the suspensions on both of players.”

Slavia, who won the match 2-0 to advance to the quarter-finals 3-1 on aggregate, have denied the claims, and said earlier this month they would file a criminal complaint against Kamara for the alleged clash in the tunnel.

In a statement issued via his lawyers, Kudela reiterated his protestation of innocence.

“I am taken aback by the fact that the UEFA disciplinary committee has arrived at a different conclusion than its inspector. He said there was no convincing evidence to support the racism charges against me, which I still reject,” said Kudela.

“I am aware it was a mistake to go to Glen Kamara and tell him anything. There were emotions in the game and unfortunately I cannot take this back. I’m very sorry.”

“I deeply regret that and apologise to Glen Kamara for a situation that has clearly caused distress to him and his teammates, as well as everyone associated with Slavia and Rangers,” Tvrdik said in a statement.

“I am taking positive steps to prevent such a situation from happening in our club ever again.”

Kudela was provisionally banned for the first leg of Slavia’s quarter-final against Arsenal in London last Thursday. That match will be deducted from the 10-match ban.

However, Kudela’s ban also applies to international matches, meaning he is likely to miss this summer’s European Championship where he was expected to have been in Czech Republic’s squad.

Kamara’s ban only applies to club competitions so he will be free to represent Finland at Euro 2020.

The 25-year-old and his Rangers team-mates reacted furiously as they claimed Kudela had cupped his hand and whispered a discriminatory slur into the midfielder’s ear.

Former Netherlands midfielder Clarence Seedorf said on Wednesday that players should be immediately sanctioned if they cover their mouth while talking to an opponent or the referee, as Kudela did.

Seedorf, a four-time Champions League winner, told a Council of Europe meeting on combatting hate speech: “There is a lot of talk but not enough being done. The need is obvious and very urgent.

“From a players’ perspective, I have seen stuff with players speaking and covering their mouth during matches.

“When we’re talking about sport it has to be completely transparent, so why would I cover my mouth if I need to talk with my adversary?”

Meanwhile, the Czech president’s office said Thursday it had complained to UEFA over the 10-match ban for Kudela for racially abusing Kamara.

Kudela cupped his hand when he made the remark to Finnish player Kamara at the end of a Europa League last 16 game at Ibrox on March 18.

Kamara, who insisted Kudela had racially abused him, was on Wednesday handed a three-match ban for attacking the Slavia player after the game which Slavia won 2-0 to give them a 3-1 victory on aggregate.

In a stormy match, Rangers striker Kemar Roofe was banned for four games for a high challenge on Slavia goalkeeper Ondrej Kolar which left Kolar with a skull fracture.

Vladimir Mynar, heading the office of Czech President Milos Zeman, said in a letter to UEFA’s disciplinary body that Kudela’s ban was disproportionately high compared to those for the Rangers players.

“I want to point out the racism charges were not proven. Even a UEFA inspector questioned whether Ondrej Kudela uttered the racist remark,” wrote Mynar, who is a Slavia fan.

“You have sentenced a decent man without a single proof… only to fulfil the pervert expectations of a narrow group of activists and of a club unable to win on the pitch.”

“In your hands, the fight against racism has turned into… hypocrisy, positive discrimination and ridiculous bowing to silly trends,” Mynar added.

He said Zeman, a veteran left-winger with a soft spot for Russia and China, had expressed sympathies to all Czech citizens who are disappointed with the decision.

Rangers said Wednesday Kamara’s claims were “vindicated” by the Kudela verdict, but complained the bans handed to Kamara and Roofe were “severe”.

Kudela, a 34-year-old Czech international, will likely miss Euro 2020 because of the ban.

His lawyers said Wednesday he would contemplate an appeal, while Slavia chairman Jaroslav Tvrdik apologised to Kamara for the “distress caused to him and his teammates.”

“We as a club have shed too much blood in this war with UEFA/Great Britain, which we cannot win,” Tvrdik said on Twitter on Thursday, calling for a truce.

Slavia face English side Arsenal in Prague in the second leg of the Europa League quarter-final on Thursday. The two clubs drew 1-1 in London last week.