A drone-eye view: How Red Dot Drone is realising Singapore’s dream to become a smart nation 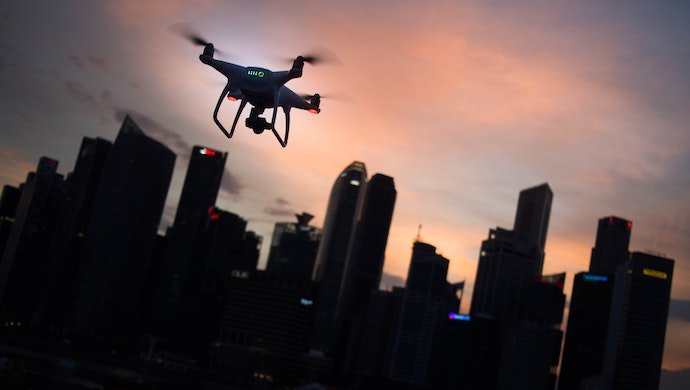 Remember that opening scene where James Bond chased a terrorist across the rooftops of Istanbul in the Hollywood favourite Skyfall?

Flying-Cam SARAH, the miniature unmanned helicopter used for close-range aerial filming in the movie, created such a buzz in Hollywood after the film’s release that several aerial filming companies were granted FAA (Federal Aviation Administration in the US) exemptions for aerial filming and saw public interest skyrocketing in the years following.

Today, aerial footage captured by drones has become so commonplace that we barely notice it anymore. In wildlife documentaries, sports coverage, commercials, or blockbusters, drones are wherever you want them to be.

It’s easy to see how drones can be handy in filming high-speed aerial footage traditionally accomplished with CGI (computer-generated imagery). On top of their speed and manoeuvrability, drones can execute dangerous feats that cameramen simply cannot afford to attempt – hanging off from cliffs, dipping between racing cars, or even hovering above choppy currents.

In recent years, many of the best aerial cinematography shots employ unmanned aircraft. (Yes, I’m talking about that dipping shot in Jurassic World that mimicked the flight movement of a Pterosaur.)

Outside the film industry, drones are also making waves in the sports space. In particular, on-the-scene coverage of extreme sports such as alpine skiing or windsurfing requires the deployment of multiple drones to follow athletes throughout their racecourse.

Before the dawn of drones, television crews used to hike neighbouring mountains to take wide shots of the action. This meant that coverage of these exciting, high-action sports became static and boring when viewed on the 2D screen.

Back home, the Housing Development Board (HDB) and Agency for Science, Technology and Research (A*Star) recently (just two weeks ago, actually) collaborated on a research project assessing the efficacy of using drones and robots to enhance construction site safety.

The Ministry of Transport is also currently in the process of drawing up safety regulations to designate drone-flying spaces for the enjoyment of local drone enthusiasts. In our ongoing fight against dengue, the National Environment Agency (NEA) has been deploying drones to inspect roof gutters in dengue red zones. In 2017, 300 drones took to the sky on Singapore’s birthday and put up a spectacular light display with just a click of a button.

Drones within the Red Dot

At BLOCK71 Singapore, Red Dot Drone (RDD), a drone software technology startup, is taking the technology further by combining the power of artificial intelligence with drones to deliver advanced services in data visualisation and creative filming.

This month, I spoke with Akira Hirakawa, a native Japanese drone expert and co-founder of RDD, to discuss his start-up’s upcoming plans for this revolutionary new space in a niche market.

What is the unique selling point of RDD? Why is AI important in this space?

As the name suggests, we are a drone company focusing on drone software technology such as automatic flight. In recent years, it is encouraging to see that drones are being increasingly used in a myriad of functions by the wider community. However, drones sold in the commercial market currently require operational knowledge, are not easy to control, and are dependent on manual flight.

At RDD, we have been developing drone software that bypasses the aforementioned problems. Using the power of software, AI, and ML, the resulting software technology is easier and safer to use. With our proprietary technology, it is our dream that everyone would be able to operate a drone effortlessly in the near future.

Are there any limitations of drone technology we may not know of?

Drones that are used to film and tag people autonomously exist in the market. However, we think that one of the most challenging components of autonomous drones is its creative movement.

For example, in sports and entertainment industries, the basic expectations for video filming is no longer simply the function of taking videos, but instead, filming techniques are expected to be creative and artistic so that the audience can enjoy an immersive experience.

While humans still have a slight edge in this field, this is an area we would like to disrupt using AI and ML in the long run.

With the upcoming adoption of 5G technology, what changes can we expect in the drone space? How will RDD adapt to ride the 5G wave?

An exciting area that we are working on is drone remote control technology over 5G. Usually, a drone pilot must be onsite physically with a controller that utilises radio frequency to control the drone.

Furthermore, with the entrance of 5G technology, drones can be easily used to perform many other functions, such as delivery or remote surveillance. In future, there could be drones constantly flying in the sky and accomplishing their tasks, monitored and supported remotely by various drone operation centres.

This way, we can save both manpower and time, and also reduce human exposure to potentially hazardous elements.

Currently, our RDD technology is capable of drone remote control over 4G/5G connectivity, enabling remote control of commercial drones at different locations in Singapore. In this video, we control a drone in Japan from our Singapore office over Zoom using 4G network.

Since the end of 2020, we have been generously supported by the Singtel 5G Lab to utilise their 5G environment for further R&D and testing. We are ready and excited to incorporate 5G capabilities into our future drone operations.

What are some crucial industries around the world that will benefit from AI drone technology?

There are many industries in that drones could be deployed for better results. Off the top of my head, I would say that surveying, monitoring, inspection, delivery, agriculture, sports/entertainment, and public safety are some of the key areas in that drones can be utilised to make a positive change.

Although the regulations and expectations in each industry will be diverse, we believe these industries will benefit from RDD’s AI drone technology.

What do you envision to be the future of drone AI?

We believe that drones will become a commonplace tool and be used to serve different needs across all age groups in our society.

Even for our primary use case, we believe that the future of aerial filming will utilise multiple drones flying autonomously at the same time to capture creative shots from multiple angles. We call this Flying Filming Studio, and we will continue to work on our drone AI technology to realise this dream.

The post A drone-eye view: How Red Dot Drone is realising Singapore’s dream to become a smart nation appeared first on e27.