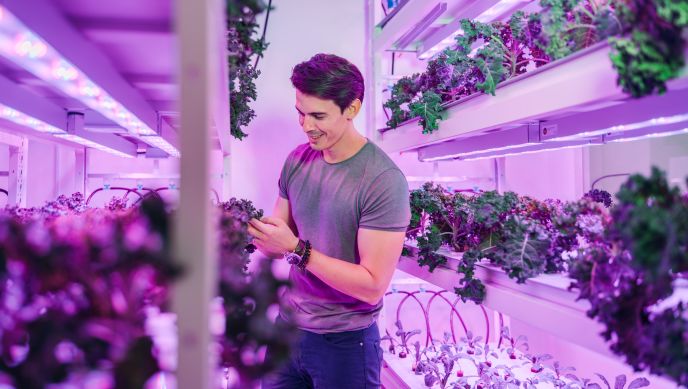 Undertaking large-scale farming is near to impossible in a country like Singapore with a land area of just 724.2 square kilometres (279.6 square metres).

According to Singapore Food Agency, only two square kilometres of the country’s land is available for farming, which is much lesser when compared with Malaysia, which uses more than 11 times the land for farming. This explains why over 90 per cent of the food items in the island nation is imported.

But this issue is just the tip of the iceberg — when the environmental implications of conventional farming methods are taken into account.

To take this problem head-on, Benjamin Swan started an agritech company in Singapore six years ago, which relies on a more efficient and sustainable way of farming.

As offbeat as it may sound, the idea for a vertical farm occurred to the Australian when he couldn’t find fresh salads in Singapore’s grocery stores.

“When I first moved here from Australia over 12 years ago, I was frustrated that it was so difficult to get good produce here,” he told e27 in an interview.

But he knew that the problem did not lie with distributors or farmers because, by the time the produce is flown to Singapore from different countries, the greens are already wilting in the bag.

“The other thing that frustrated me was the food waste that would accumulate at the bottom of the bag if I didn’t eat the greens within 12 hours,” he said.

But funnily enough, it was a Facebook post that brought in the real motivation for Swan to go deeper into vertical farming.

“When I read a Facebook article about vertical farming, I thought to myself, ‘hey, this is cool and I can grow myself a great salad at home’,” he said.

This is when he started testing out by growing plants indoors while still holding on to his full-time job as an engineer.

Initially, he began to grow kale in the basement of a swimming pool at over 42 degrees, which was hitherto unheard of, as the item generally grows at a temperature of 18 to 20 degrees.

After 18 months of heavy research, he, along with his co-founder Martin Lavoo, launched Sustenir Group, a vertical farm that sells its products in stores like Redmart and Cold Storage.

The indoor farming facility has sensors operating 24 hours to provide the company with data on the health and status of all its plants. The parameters used include humidity, temperature, and light.

After receiving data from the sensors, its system adjusts the environment for each plant accordingly.

While the majority of farmers use pesticides to manipulate the physical appearances of fruits and vegetables, Sustenir Group doesn’t use any.

Since Sustenir uses no chemicals, Swan claims its vegetables and fruits are not only more nutritious but also taste better — with customers coming back in surprise, seeking where he gets the vegetables from because their children enjoy the vegetables very much.

While traditional farming is a highly laborious occupation with hours spent toiling under the parched sun, the farming experience for employees at Sustenir is far different.

“Instead of someone working day and night, what happens is that everything inside the indoor farm is pre-scheduled. So we know when a plant needs to move and be harvested because we can control exactly how much solar radiation goes to the plant. It is all pre-planned,” he explained.

“It’s not like outdoor farms where you might have too much cloud coverage this month. So we have to leave the plants in for another couple of days. Everything is planned and scheduled. It’s all within our stride,” he remarked.

In the future, Sustenir Group plans on leveraging both indoor and outdoor farming methods.

“As of now, it’s not possible to grow products like bok choy on an indoor farm. That’s why it is necessary for us to still leverage outdoor technology and improve it somewhat, so we can become more efficient with our products that are going out on land. Because the reality with indoor farming is that we can only grow limited products here,” he said.

“We have just got the third market under our belt with big ambitions to build across Southeast Asia and North Asia in the coming years,” he said.

Although Sustenir’s farm is cash-flow positive, Swan said that the company is more focused on growth rather than profits.