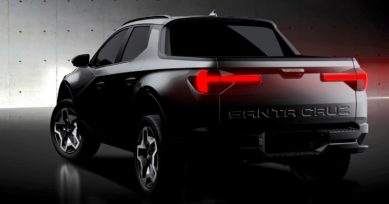 
With six years having passed since its unveiling as a concept at the North American International Auto Show in Detroit, Hyundai, after a series of speculative reports and pre-production spy images, has released first official teaser images of the all-new Santa Cruz bakkie.

Reportedly on track to debut on the 15th of this month, Hyundai’s unibody rival for the Honda Ridgeline and incoming Ford Maverick will ride on the same platform as the new Tucson, which has also served as styling inspiration.

Sporting the same front facia as the SUV complete with the Parametric Hidden Lights, the overall silhouette has been toned down little from the concept, aside from the presence of rear door handles, new taillights sporting a horizontal T-pattern of LEDs and block letter Santa Cruz badging on the tailgate.

The newcomer’s now confirmed close links with the Tucson is likely to be carried over to the interior where Hyundai’s so-called Interspace design method will be applied.

In spite of no images being released, expect the Santa Cruz’s cabin to feature the 10.25-inch touchscreen infotainment system and digital instrument cluster, the minimalist climate control panel and the push-button operated automatic transmission derived from the Palisade and more recently, the Staria.

Up front, rumours have alleged the Santa Cruz will make use of a batch of four-cylinder petrol engines spanning from a 2.0-litre turbo to a normally aspirated 2.4, as well as the 2.5-litre turbo used in the US-spec Sonata N Line and new Sorento. A large displacement V6, possibly the 217 kW 3.8 from the Palisade, has also been mentioned. Production Santa Cruz has been toned down little from the concept shown six years ago.

Regardless of the engine, the Santa Cruz is likely to be offered only with the eight-speed automatic ‘box, with drive going to the front wheels as standard. All-wheel-drive as opposed to four-wheel-drive will however be offered to counter the all-paw gripping system the Ridgeline now comes with as standard.

Confirmed for production at Hyundai’s Montgomery Plant in Alabama, the Santa Cruz, as known by now, will be restricted to the United States with no plans afloat to offer it with right-hand-drive. Instead, its position will be plugged by the unnamed body-on-frame bakkie earmarked for unveiling next or in 2023, which will reportedly derive motivation from the 205kW/588Nm 3.0-litre straight-six turbodiesel used in the Genesis GV80.

Expect more details and images of the Santa Cruz to be revealed in the coming weeks leading up to its debut in just over two weeks from now.