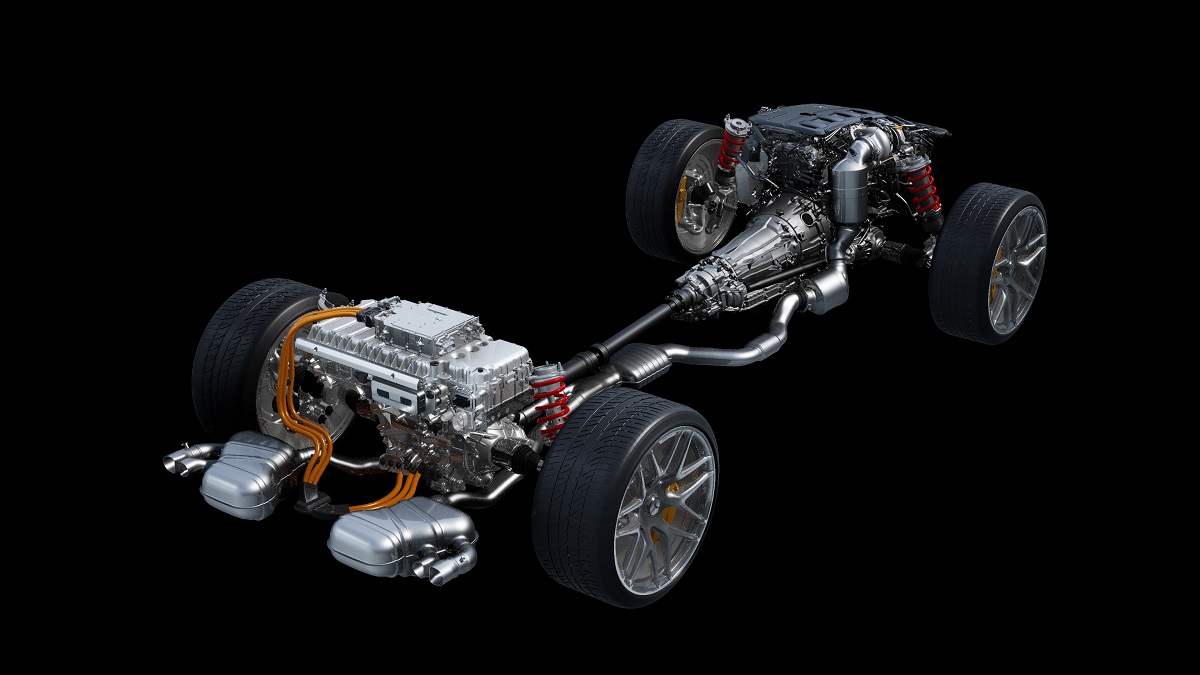 
Mercedes-AMG has provided another glimpse of the incoming GT73e 4-Door while at the same time divulging official details of its new electrified four-cylinder powertrain poised for the C63.

Incorporated underneath the new E Performance sub-brand, the system, in V8 guise bound for the GT73e and the incoming all-new SL73e, will comprise of the familiar M177 4.0-litre bi-turbo V8 and a rear mounted electric motor that can produce up to 150kW/320Nm.

Known in AMG-speak as the Electric Drive Unit or EDU, the setup also includes the AMG-tuned variable 4Matic+ all-wheel-drive system, an electronic diff-lock and a unique two-speed automatic transmission that provides drive to the rear axle without any input from the standard issue nine-speed MCT ‘box.

Still disguised Mercedes-AMG GT73e will be the first model to debut the new electrified V8.

Similar to the setup used in the Porsche Taycan, the box only selects second gear at speeds above 140 km/h thanks to an electronic actuator, at which time the electric motor will be spinning at a 13 500 rpm.

A configuration reportedly derived from the systems used in its Formula 1 programme, AMG claims a continuous power output of 70 kW from the 89 kg battery, while the mentioned 150 kW lasts for around ten seconds. Combined, the EDU produces 600kW/1 000Nm which translates to the 0-100 km/h dash taking “less than three seconds” depending on the model it powers.

In addition, the Dynamic Select system has been tweaked to feature six modes; Electric at up to 130 km/h, Comfort, Sport, Sport+, Individual and Race. As before, the electronic stability control can be varied from a choice of four settings; “Basic” in Electric and Comfort modes, “Advanced” in Sport, “Pro” in Sport+ and “Master” in Race. All four however apply in Individual mode.

Arguably just as if not more important than the V8 is the new four-cylinder set to power the C63. As speculated earlier this year based upon reports from 2019, the configuration will consist of the 2.0-litre M139 unit used in the CLA 45 S and A45 S, combined with the battery mentioned above and a 48-volt mild-hybrid system, the latter also prominent on the V8. As big as the change to the 63, AMG also revealed the forthcoming 43 and 53 models will become all-electric models and ride on the dedicated EQ architecture. No more details regarding power or performance were revealed.

At present, the hybrid system is slated to bow in later this year first in the GT73e and then next year in the C63.