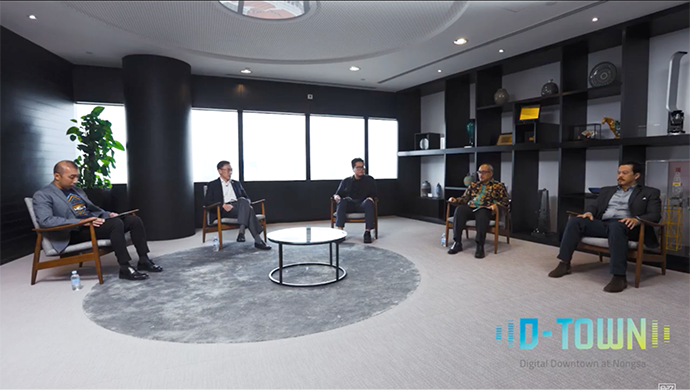 Nongsa D-Town held a virtual grand launch on March 2nd, 2021. Opening statements for the event were officiated by Airlangga Hartarto, Indonesia’s Coordinating Minister for Economic Affairs, and Chan Chun Sing, Singapore’s Minister of Trade and Industry. The event was then subsequently split into three “fireside chats” — themed discussions, each featuring their own array of panellists and moderated by E27 co-founder Thaddeus Koh.

Speakers for each fireside chat hailed from all stakeholders involved with the development of D-Town, including government officials as well as current tenants at Nongsa, providing a glimpse of what Nongsa Digital Park (NDP), the initial tech office campus at Nongsa D-Town, has blossomed into so far since it started operation in 2018, and what the future may hold with the Nongsa D-Town masterplan to create a vibrant regional tech hub that represents a digital bridge between Singapore and Indonesia.

D-Town is a proposed digital hub built on the Indonesian island of Batam, situated a mere 40 minutes off the coast of Singapore. Nicknamed “The Digital Bridge between Singapore and Indonesia”, D-Town grew out of the existing tech ecosystem at NDP and the creative community that is spawned from Infinite Studio’s animation and film studio that has been in Nongsa for over a decade. Nongsa D-Town is designed with the tech and creative industries in mind with the intention to grow a digital ecosystem filled with regional talent between Indonesia and Singapore.

Also read: Here are 5 reasons to expand your business to the Philippines

Every element in D-Town was designed for the express purpose of building a vibrant community of digital talent who can work, live, and play, within 62-hectares of developed space.

The vision behind Nongsa D-Town

A common point of discussion throughout the webinar was the apparent tech talent gaps in Singapore. Being a small nation-state, Singapore’s small population alone is unable to meet the demands of its booming economy despite its technological and economic advantages, which larger populations like Indonesia are able to supplement.

Wilson Tan, the co-founder of the Webimp group, a bespoke IT solutions firm that set up shop at Nongsa three years ago, described the role businesses based in Nongsa have in bridging this talent gap during the event’s third fireside chat.

“In an entrepreneurship perspective, it doesn’t make sense for Singapore to keep treating Indonesia as a ‘factory,’ in the sense that local workers remain as programmers who only do work. At Webimp, we promote organically and train our local technical talent for the opportunity to become senior programmers and engineers so that they can fill the apparent gap.”

This kind of on-the-job training is exactly why the Indonesian government is so eager to support the project. An exchange of talent and technology between Singapore and Indonesia seems inevitable at a place like NDP, where tech talent from the two countries are able to collaborate with each other.

“Nongsa presents an opportunity to upskill our younger workforce for the digital economy,” said Tommy Suryopratomo, Indonesian ambassador to the Republic of Singapore, at the first fireside chat of the webinar.

Indonesia is a young country with a deep talent pool. Roughly 60% of the country’s 257 million people are within the productive age range of between 15-64 years old. It is not surprising, then, those hopes are high for Indonesian youth working for tech companies and startups at Nongsa to eventually bring back their newfound knowledge to their hometowns and villages across the archipelago.

This arrangement is a win-win situation for both employer and prospective employee as an operation in Nongsa also serves as a springboard for international, especially Singaporean, companies who want to expand into the Indonesian market.

Another overarching topic discussed during the grand launch is the geographical advantage of establishing a tech team in Nongsa for Singaporean companies or other multinational organizations. Batam’s close proximity to Singapore allows it to serve as a springboard for Singaporean companies, as the 40-minute commute between the two islands makes it possible for an executive or entrepreneur working in Singapore to visit the tech team in Nongsa and return home within a single day.

Indonesia’s current tech capital in Indonesia is Jakarta, but NDP is an ideal bridge for Indonesian tech talent who desire to work for overseas companies due to said proximity to Singapore. Simultaneously, the increased flow of talent to Nongsa-based Singaporean companies solves Singapore’s finite tech talent gap.

NDP builds on Infinite Studio’s decade-long presence in Batam, which has been a success and a sort of “microcosm,” to quote Mike Wiluan, President Director of Nongsa D-Town, of what the settlement will look like in the future.

The future of D-Town

When asked about the estimated completion date, Marco Bardelli, Boardmember and Senior Director of NDP, and Andrew Wee, Director of Design at Surbana Jurong, predicted that the entire Nongsa D-Town would take 10 years to finish, with Phase 1 of development coming to a close in 2023. At that point, around 8000 tech and creative talents will be based in NDP in addition to the roughly 1000 currently living and working there.

As D-Town opens for business to the outside world, the incentives for companies on both sides of the Singapore strait to set up shop on Batam will continue to grow.

This article is produced by the e27 team, sponsored by  Nongsa D-Town