Australia’s east coast is facing a trail of destruction left behind by the unprecedented flooding emergency as more regions are given the all clear to return home.

Water levels remain high across large parts of the state with thousands still isolated across Greater Sydney and the state’s north-west.

Emergency services have been slammed with 12,368 calls for help and more than a thousand flood rescues over the last five days.

Currently, 290 Australian Defence troops are on the ground assisting with clean-up and recovery with plans to double forces.

Thousands of people living around Londonderry and the Colo region also remain under evacuation warnings with flood waters still at dangerously high levels.

Meanwhile Jamisontown, Mulgoa, Eastern Creek, the Hawkesbury from Wisemans Ferry to Brooklyn, Mcgraths Hills, Mulgrave and Windsor have been given the all clear to return home.

Residents at Rickabys Creek have been given the all clear after an evacuation warning was issued on Monday.

In the north, evacuation orders remain current for Moree, North Macksville and Southgate after river levels peaked yesterday morning during the region’s worst floods in over a decade.

Residents in the Kempsey CBD have also been given the all clear with recovery efforts now underway.

The Sydney metropolitan region still on flood watch along with parts of the Mid North Coast, Hunter and parts of the South Coast however no further heavy rain is forecast occur over the weekend.

Conditions are expected to be mostly sunny and mild around the state aside from a strong wind warning for the Hunter Coast.

Sydney will be partly cloudy today with a high chance of showers along the coastal fringe and a maximum temperature of 24C.

In Queensland eleven flood warnings remain in place, with a moderate alert out on the Logan river.

The 2021 flood disaster in numbers

Over the course of the floods, the NSW coast has been drenched by at least 200mm of rain, and in some places, more than 400mm. This is more than three times the Sydney average for the whole of March.

The flooding stretches 600 kilometres from Sydney to the Northern Rivers.

The BOM’s Victoria Dodd said the state had experienced “the most significant floods in decades”.

On Wednesday, the BOM had issued flood warnings on 33 of the state’s 40 river catchments.

The Hawkesbury River at Windsor peaked at 12.9m on Wednesday, the highest level in 60 years.

Records fall on Mid-North CoastAt Mount Seaview, in the hills west of Port Macquarie, rainfall records have been smashed in the past week, with 815 mm falling over five days.It’s the highest total since records began there in 1960.

Further up the coast at Nambucca Heads, the community was one of the first in NSW to be hit with flooding last Saturday when 350mm of rain fell, swamping the March average of 161mm. 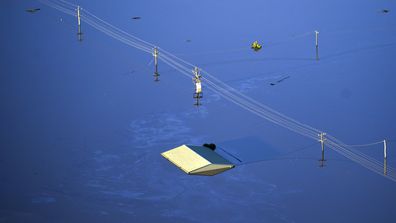 The river at Macksville has exceeded the major flood level , reaching 3.4 metres in 1950 – a one-in-50-year flood.