Perth emergency doctor Andrew Lowe has seen three of his planned wedding dates come and go in the past 18 months.

When he and his fiancée Richa, a teacher from India, first applied for a prospective marriage visa almost two years ago in June 2019 they had hoped to get married in a year.

“We were going to do a small wedding here and a big wedding in India,” he told nine.com.au.

“Originally, we planned the date for August 2020, then December 2020, and finally in March this year … but that has all gone out the window now and we have no idea what will happen.”

Dr Lowe is one of an estimated 6000 Australians who are waiting for their partners’ prospective marriage visas to be approved.

Like many Australian visa types, waiting times have blown out since the COVID-19 pandemic.

According to the latest Department of Home Affairs figures, three-quarters of prospective marriage visa applications are now being processed within 18 months and 90 per cent with 29 months.

While the department was granting an average of 180 prospective marriage visas per month before the pandemic hit, it approved less than 15 per month in between April and September last year.

Unlike the more popular partner visa – which also has lengthy processing times and a backlog of some 50,000 applicants – those granted the prospective marriage visa are not considered immediate family and are therefore not automatically exempt from the travel ban.

Many couples granted prospective marriage visas say their subsequent applications for a travel exemption have been rejected.

Amelia Elliott, who helps run the Grant Offshore Visas Now Facebook page – which has 2700 members – said being granted a prospective marriage visa appeared to make no difference to getting a travel exemption granted by the Australian Border Force.

“One member of our group lodged over 30 times for his fiancée’s travel exemption – even through different agents – and was continually denied,” Ms Elliott said.

“Another member got her fiancé’s PMV300 approved a month ago and I think she is up to around her seventh refusal.

“Unless there is a change in ABF criteria they are unlikely to have success.”

Dr Lowe said he feared that even if Richa was granted her prospective marriage visa, she also wouldn’t be given a travel exemption.

‘You just want to start your life’

Dr Lowe first met Richa when they were both members of the same Rotary International youth organisation.

“Initially, we were pen pals. I was in my third year of med school and I was looking at going to Mumbai for a placement and so I starting chatting to Richa,” he said.

“I didn’t end up going to India, I went to Scotland. But we ended up forming this nice relationship where we chatted for hours and hours.”

The pair finally met in person in France, where Richa was studying, in 2015, and got engaged in Perth in 2019.

“We applied for a prospective marriage visa because we were just playing by the rules that were there at the time,” Dr Lowe said.

In order to be able to apply for a partner visa, couples need to be either married or have lived together for a year.

“We could have got married and applied for a partner visa, then we wouldn’t have been in this situation, but we didn’t know how things would turn out,” he said.

Desperate to be together and finally start their lives, Dr Lowe said he and Richa had both applied for numerous travel exemptions over the past few months.

“Sometime in December 2020, we heard that if you manage to get the travel exemption, the chances of your visa being processed may increase,” he said.

“Richa has twice tried her luck under the ‘immediate family’ category. But with no joint lease and bank accounts, we decided to use my critical skills to get her here. We have lost count of the number of applications we have made.” 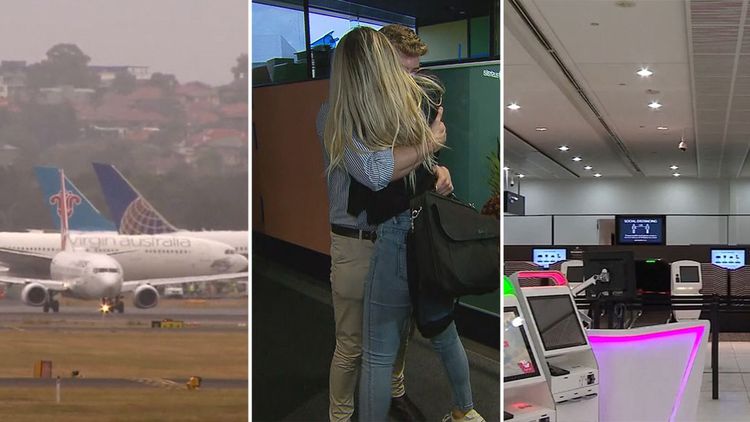 Dr Lowe said his applications for a travel exemption so he could fly to India to marry Richa were also rejected because he was unable to take three months off his work as a doctor during the pandemic, a key time threshold considered by the ABF.

He now plans to take six months off from his job later this year to fly to India.

Dr Lowe said the enforced separation had taken a toll of both of them.

“It’s obviously really emotionally distressing to be apart from your partner for such a long period of time. You just want to start your life together,” he said.

“Her life is completely on hold and she is really distressed about the situation.

“It’s horrible to see your partner so upset and there is nothing that you can do.”

Dr Lowe said he believed the government’s treatment of the couple, as well as other prospective marriage visa applicants, violated the International Covenant on Civil and Political Rights (ICCPR) and he had lodged a complaint with the Australian Human Rights Commission.

“(The ICCPR) says that a family should be free of arbitrary interference from the government. Saying you didn’t marry her on this date so you can’t travel, what is more arbitrary than that?” Dr Lowe said.

“It also says that two individuals should not be prevented from starting a family, which is exactly our situation.”

Dr Lowe said while he understood the need to restrict travel during the pandemic, prospective marriage visa applicants were just one group of many who had been let down by the Federal Government.

“Stranded Australians have been let down, skilled migrants, internationals students and people like myself have all been let down by the lack of federalised quarantine and not increasing the quarantine caps safety,” he said.

However, the travel ban on prospective marriage visa holders, who often had critical skills and made up such a small part of Australia’s migration program, did not make sense, he said.

“Why would you, for such a small group of people, create such a large amount of misery?” he said.

Victorian MP Julian Hill urged the government in parliament yesterday to “show some compassion” and reconsider the travel ban imposed in relation to prospective marriage visas.

“People who applied for the 300 prospective marriage visa are often the fiancés of Australians. Even if they have the visa issued, have paid their $8000 and have waited years, they are not getting travel authorisations to come here,” Mr Hill said.

“There’s enormous sadness and anger amongst Australians that they are being discriminated against because of the visa which their partner applied for.

“But if you’ve been together for five years but you haven’t lived together for one year then apparently that’s not okay. It’s discrimination.”

The Department of Home Affairs is yet to respond to nine.com.au’s request for comment.

The department says on its website: “Prospective Marriage visa holders can request an exemption from Australia’s travel restrictions for consideration on a case-by-case basis.

“An intention to marry is not sufficient evidence to demonstrate that a person is the immediate family member of an Australian citizen or permanent resident.”