The NSW State Emergency Service warned residents in several areas on the outskirts of Sydney to prepare to evacuate in the morning as the severe weather continues across the state today.

Residents along the Hawkesbury River were put on alert with warnings for Pitt Town Bottoms, low lying parts of North Richmond, Grono’s Point and Cornwallis.

The Picton CBD south-west of Sydney also was given a warning on Saturday evening, as sandbags began lining the streets.

Other warnings were issued at Paterson and Williams Rivers Dungog, Gloucester River at Gloucester and Manning River at Wingham, and low lying areas of North Macksville.

The Manning River at Taree peaked at 5.65 metres around 2pm yesterday and around 1.30am was still sitting at 4.65 metres and falling with major flooding.

According to the Bureau of Meteorology, these levels are higher than the 1978 floods, when the river reached 5.4 metres, and the 2011 floods which reached 4.5 metres. It also comes close to the record flood level of 6.0 metres in 1929.

Cars lined the streets as they waited for the highway to reopen after being inundated by flood waters.

NSW SES have received just under 3200 requests for assistance state wide since 6pm on Friday, most of those on the Mid North Coast area. They have conducted 525 flood rescues with requests increasing in Sydney Metro area. 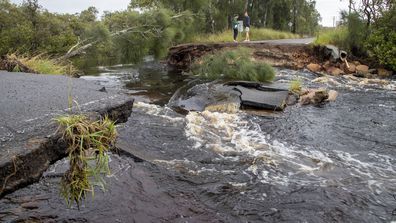 Roads ripped up as wild weather continues across NSW

Residents in Penrith and North Richmond, in Sydney’s west, are expected to experience flooding after the Warragamba Dam – Sydney’s main water source – spilled over yesterday afternoon, combined with rising levels in the Upper Nepean River and Grose River.

The last significant spill from Warragamba was in August 1990.

Justin Robinson, Flood Operations Manager at the BOM, said flooding levels near the Nepean and Hawkesbury Rivers could be similar to the major event which occurred in February 2020.

“(We are) expecting the levels to be similar to the February 2020 event and usually we’ll see Penrith peak first and you go downstream to North Richmond and then Sackville and lower Portland,” he said.

“So, expecting the initial rivers to peak Saturday night into Sunday, and maybe lower Portland might start peaking into Monday.”

Dams such as Nepean, Cataract, Cordeaux and Avon are also expected to reach capacity and begin spilling.