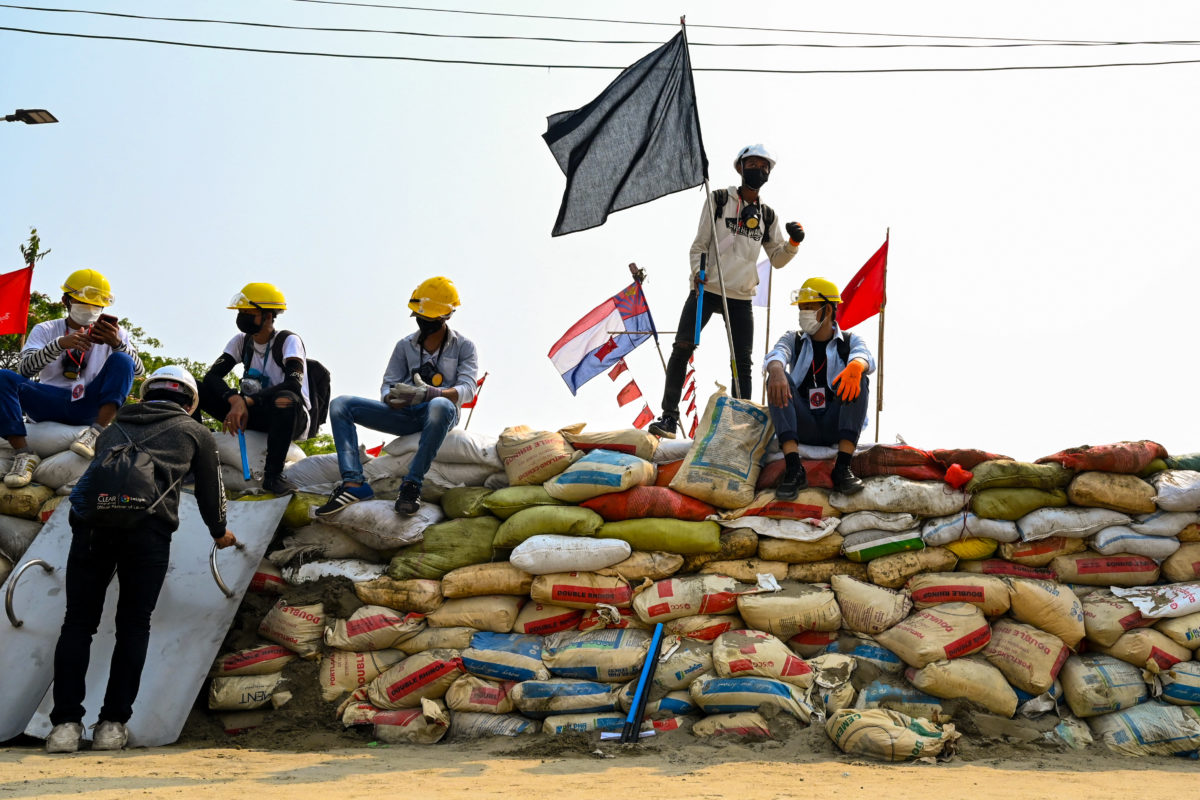 
At least 18 anti-coup protesters were killed Sunday in one of the deadliest days since Myanmar was thrust back under military rule, as a group of ousted MPs urged citizens to “defend themselves” during the nation’s “darkest moment”.

Myanmar has been in turmoil since the military wrenched civilian leader Aung San Suu Kyi from power in a February 1 putsch, triggering a mass uprising that has seen hundreds of thousands protest daily for a return to democracy.

The junta has repeatedly justified its power grab by alleging widespread electoral fraud in November’s elections, which Suu Kyi’s National League for Democracy party won by a landslide.

In response, a group of elected MPs, many of whom are in hiding, have formed a shadow “parliament” called the Committee for Representing Pyidaungsu Hluttaw (CRPH) — the Burmese word for the country’s governing bloc — to denounce the military regime.

They issued a statement Sunday saying protesters had the “full right to defend themselves” under the country’s penal code against security forces who are “harming and causing violence”.

Soldiers and police have in recent weeks been staging near-daily crackdowns against demonstrators calling for a return to democracy — deploying tear gas, rubber bullets and live rounds to quell anti-coup protests.

More than 80 have been killed, but the number is expected to increase dramatically after Sunday’s violence — marking it as one of the deadliest days as Myanmar enters its seventh week under a junta regime.

In Yangon’s massive Hlaing Tharyar township, police and soldiers faced off against protesters wielding sticks and knives as they hid behind makeshift barricades, fleeing after the security forces opened fire.

Protesters — using cut-out trash cans as shields — managed to retrieve the injured, but a doctor said not all could be reached.

“I can confirm 15 have died,” the doctor told AFP, adding that she had treated about 50 people with injuries and expects the death toll to climb.

“I cannot talk much — injured people keep coming,” she said before hanging up.

The Assistance Association for Political Prisoners monitoring group — which verifies arrests and fatalities since the coup — confirmed a higher death toll.

Throughout the day, gunshots were heard continuously by residents hiding in their homes as smoke rose above the streets, while military trucks were sighted driving through Hlaing Tharyar’s streets.

A police officer posted a TikTok video hours before the crackdown, saying in a voiceover that they would be bringing heavy weaponry.

“I will not have mercy on Hlaing Tharyar and they will fight back seriously too because there are all kinds of characters there,” said the officer under the account @aungthuraphyo40.

The video, which was seen and verified by AFP factcheckers, was removed hours later.

State-run media on Sunday evening did not elaborate on the violence, but said five factories in the garment-producing township had been razed.

Among the burned buildings were Chinese-owned factories, said the embassy in Myanmar, condemning the actions of the “destroyers” in a statement posted on their official Facebook.

“The Chinese embassy… quickly urged local police to guarantee the security of Chinese businesses and personnel with effective management,” it said.

“China urges Myanmar to tackle an effective plan by stopping all violence.”

The evening news also confirmed another death in Tamwe township, saying that hundreds of protesters attempted to torch a police station, which caused authorities to open fire to disperse them.

Similar scenes of chaos unfolded throughout the day in other parts of Myanmar — with one shot dead in the northern Hpakant city and another woman killed from a headshot in Mandalay.

Despite the daily bloodshed, those in the anti-coup movement remain defiant, and have hardened in recent weeks.

“I’ve seen the fallen heroes give their lives,” said 21-year-old Ma Khine Lay, admitting she was afraid even as she rebuilt barricades out of bricks and bamboo poles in a Yangon township.

“I will fight until the end.”

– ‘The darkest moment of the nation’ –

The violence came a day after the acting vice president of the CRPH called for the people to continue protesting against the military’s “unjust dictatorship”.

“This is the darkest moment of the nation and the light before the dawn is close,” said Mahn Win Khaing Than in a recorded video posted on the CRPH’s Facebook page Saturday night.

A high-ranking NLD politician who served as speaker of the house during Suu Kyi’s previous administration, he was placed under house arrest during the February 1 power grab, according to the Assistance Association for Political Prisoners monitoring group.

His Saturday address was his first appearance as CRPH’s acting vice president, and he echoed the anti-coup movement’s calls for a “federal democracy” — which would allow ethnic minority groups to have a role in Myanmar’s governance.

“This uprising is also the chance for all of us to struggle together hand-in-hand to establish a federal democracy union,” he said.

“The uprising must win.”

The junta — self-anointed as the State Administration Council — has said the CRPH’s formation is akin to “high treason”, which carries a maximum sentence of 22 years in jail.