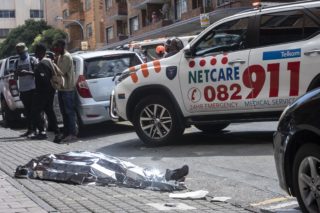 
Finance Minister Tito Mboweni is coming under fire, after proclaiming that “there Was no student who was killed” during the protests at Wits University on Wednesday, and proclaiming that claims to the contrary are “fake news”.

According to authorities there was in fact a fatality, after a man, who had just left a doctor’s office, was struck twice by rubber bullets and succumbed to his injuries. Multiple videos and images were shared of the man’s last moments lying on the pavement, surrounded by students crying for help.

According to Netcare 911’s paramedics, the man had just come out of a doctor’s practice when police fired rubber bullets at protesting students.

Details on whether he was simply an innocent bystander or a student as well are still, unclear, but Mboweni appeared to have made up his mind.

My information is that there Was no student who was killed! Fake news circulating. No deserving student will be left out. Minister Ndzimande will deal with matter tomorrow.

The minister’s tweet was met with outrage from scores of users, including EFF leader Julius Malema who reminded him that whether the deceased was a student or not shouldn’t be the issue.

Malema replied. “Life was lost during the peaceful student’s protest, which is not fake news. We know you don’t care, but some empathy will be beneficial now, Tito!!!”

The point is not about whether it was a student or not. A black person was murdered by your administration as a result of students protesting for education. A life was lost. Get it??

It doesn’t matter whether that was a student or what, fact someone was killed and by the police.. Also they were beating up and arresting students.. Stop tweeting nonsense ???????????? pic.twitter.com/huHXRalPkY

Wits students are protesting against the exclusion of indebted students and the start of lectures on Monday despite more than 8,000 students not yet registered due to owing the institution money.

The Independent Police Investigative Directorate (Ipid) confirmed earlier that they are investigating the circumstances surrounding the shooting.