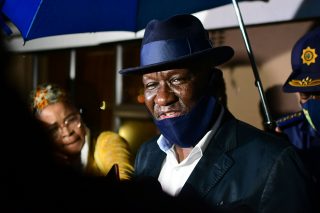 Cele was speaking to the Parliament portfolio committee on police on Wednesday, amid concerns about delays in DNA testing.

“Things are absolutely not acceptable with the DNA in the SAPS. It’s an issue of not serving justice to victims of murder and GBV. Internally, we’re paying attention to it,” Cele said.

“The question would be resources and supply chain should have been fixed by now to sort out those issues because an extra R250 million was put there – taking the budget from R317,717 million to R563,393 million. I’m told only 30% of that amount has been used to this point.

“I’m told that our laboratories in terms of DNA are almost on zero. It’s an issue that gives one sleepless nights,” Cele said.

To deal with the backlog nationwide, the SAPS has enlisted 150 new entry level forensic analysts and 150 posts have been approved for the 2021-22 financial year.

The enlistments will take place with effect from 1 July.

There is a dedicated overtime budget of R18,5 million allocated to NFSL to prioritise the DNA backlog processing project and 1,360 forensic analysts have been trained so far.

ALSO READ: South Africa in the midst of a serial rape crisis – report

“Announced and unannounced compliance inspections will be conducted at critical facilities and environments to support performance and mitigate audit findings,” the committee heard.

The SAPS is also prioritising the outstanding vaccination of 393 forensic analysts, while it deals with the unavailability of polyester swabs for evidence recovery. The procurement process is at an advanced stage, the committee heard.

The Western Cape leads the DNA testing backlog followed by the Eastern Cape and KwaZulu-Natal.

Meanwhile, the DA says it will lodge a complaint with the Human Rights Commission against the SAPS and NFSL about the DNA backlog.

“The DA first started raising the alarm on this issue in 2019 when the case exhibits backlog was less than 100,000. In November last year the figure reached over 117,000 and SAPS presented an unrealistic turnaround plan which has failed to deliver any tangible outcomes in its first four months,” the party said.

“We believe this gross failure to keep the NFSL operating smoothly is a human rights violation on the part of SAPS as victims suffer the indignity of waiting for justice while living in perpetual fear. We believe that it is therefore critical for the SAHRC to investigate this matter with urgency.”