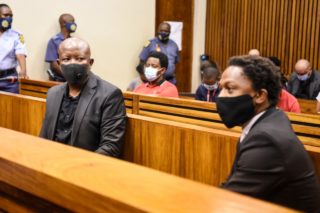 
Questions have been raised about the credibility of video footage of EFF leader Julius Malema and party MP Mbuyiseni Ndlozi’s alleged assault of a police colonel at the burial Winnie Madikizela-Mandela.

This is as the pair’s criminal trial resumed in the Randburg Magistrate’s Court on Tuesday morning.

The charges against Malema and Ndlozi date back to April 2018 when they are accused of pushing Lieutenant-Colonel Johannes Venter – a member of the Presidential Protection Services – after he refused their vehicle entry to the Fourways Memorial Park where Madikizela-Mandela was being buried.

Their trial kicked off last October, with Venter testifying as the first witness for the state.

On Tuesday, proceedings picked up again and Deon Klingbiel, the former manager of the cemetery, took the stand.

Klingbiel told the court he was on duty that day but didn’t witness the altercation first hand.

ALSO READ: ‘At no stage’ did cop provoke Malema or Ndlozi in assault case, court hears

He said, though, after the fact he was approached by a Colonel James Bronkhorst who wanted to know if there was any chance the incident had been caught on camera.

“I said to him it was possible,” Klingbiel told the court. “I told him he should come back later so we could go through the images together.”

Early that evening, he and Bronkhorst met again and he downloaded the footage onto a flash drive for the officer.

But Klingbiel told the court he had made another copy for himself and, under cross-examination, advocate Laurence Hodes SC for Malema and Ndlozi honed in on this.

CIC @Julius_S_Malema and Commissar Dr @MbuyiseniNdlozi are appearing the on the matter relating to the denial of their entrance to Mama Winnie Madikizela Mandela’s funeral. pic.twitter.com/fiOsR5LFGd

Hodes pointed out that Klingbiel had not mentioned having made another copy when he first deposed to a statement in the case.

“One gets the impression there was only one copy ever made of the video,” he said.

“Then the impression is wrong,” Klingbiel responded.

“Was this something that was secret between the two of you?” Hodes pressed further.

READ MORE: If I had laid a hand on him, I would have ‘panelbeated’ him – Malema denies assaulting cop

Klingbiel replied it was not secret but that it was sensitive.

“There was video footage shown in the media – posted by AfriForum and other people – do you know where they got their footage from?” Hodes asked Klingbiel.

He was adamant he had no idea. “Not from me,” he said.

Hodes put it to Klingbiel he could not prove the video footage had not been tampered with.

Klingbiel said, though, it had a time stamp and  if it had been tampered with this would be easy to pick up.